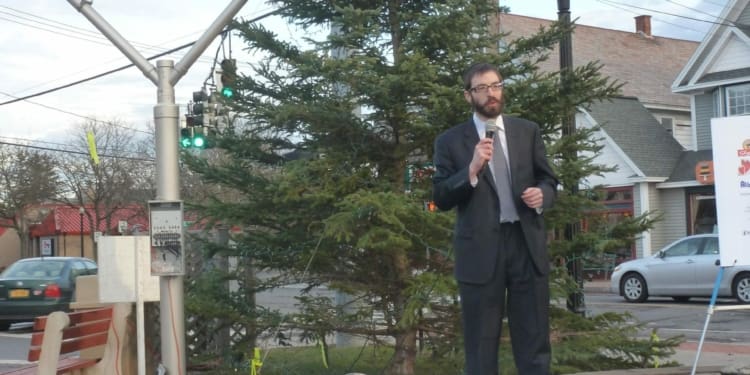 In a local celebration of the Festival of Lights, the Capital Region’s largest outdoor menorah was lit on the second day of Hanukkah at Delmar’s Four Corners.

During a ceremony held on the afternoon of Sunday, Dec. 9, about 75 people stood and watched as two electronic candles were lit on the giant menorah. The event was hosted by the Bethlehem Chabad and was followed by the town’s first-ever “Hanukkah Wonderland” at Town Hall.

The event was filled with festive music and laughter, and was presided over by Rabbi Nachbar Simon (garbed in a gifted Hanukkah sweatshirt) and his son, Zalman Simon.

“One of the ideas of Hanukkah is to light up the dark world, so therefore it’s also a more universal holiday for all humanity,” said Rabbi Nachbar Simon.

Supervisor John Clarkson said he is proud the Bethlehem community is able to support its Jewish residents with the menorah. “In this town, I like to think we do things right,” he said.

Members of the Bethlehem Chabad began making plans for the lighting and wonderland event six months ago. The celebration was done on a larger scale this year in hopes of getting the greater community involved and having a fun event in town for those of the Jewish faith.

“We do an annual Hanukkah party every year, but we though this year we wanted to get the community involved instead of doing it low key, and on a weekday,” said Zalman Simon, who organized the ceremony and event with his wife Chana.

The Hanukkah Wonderland was held at Town Hall following the ceremony until 6:30 p.m. There was traditional food for sale and activities for the kids including a “make your own menorah” station, dreidel games and donut decorating. There was also entertainment like a latke cooking demonstration and magic show. Simon said all of the activities were put together with some creative efforts from his wife and the Chabad to keep the event interesting for kids.

For those that didn’t have a menorah at home, smaller wooden versions were given out during the event and residents could read information about traditions that coincide with the holiday.

Zalman Simon said the event was meant to bring people together and he thinks it is the beginning of a larger event.

“We’re looking to grow in our catering of the community and try to spread the message of Hanukkah,” he said. “ A little bit of light can dispel much darkness, so one act of goodness is able to do a lot. Even though some people might think it’s insignificant, it’s not.”

Fear and loathing at the tollbooths