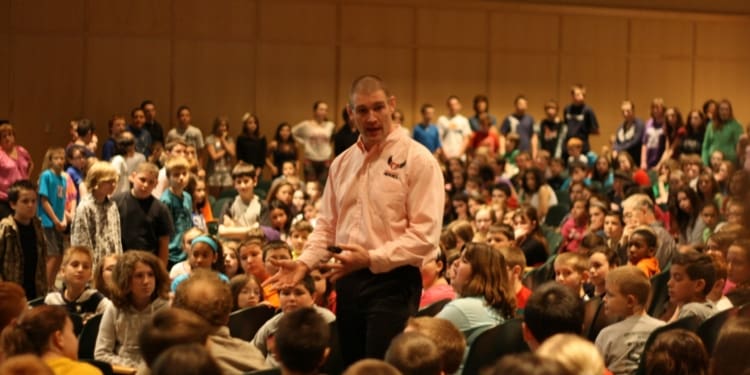 Schalmont students were encouraged to be a fellow student’s hero through a unique anti-bullying presentation aimed to stop kids from just be a bystander.

Thomas Murphy from Sweethearts and Heroes, a non-profit organization aimed at stopping bullying, gave three presentations to the Schalmont community on Thursday, March 22. Each presentation was tailored to its audience, with one for fifth to eighth grade students and another for high school students. Also, a presentation was done for parents to show what their children had learned and how parents can help encourage their children to stop bullies.

Murphy co-founded the organization in 2010 with fellow mixed marital arts competitor Jason Spector and both are New York natives. Murphy is a professional MMA fighter and also competed in Spike TV’s second season of “The Ultimate Fighter.”

Murphy’s push is for non-violent solutions to bullying problems. One of the tools he presented students with was the “A,B,C’s,” which stands for away, buddy and confront.

Moving away allows students to not give attention to the bully, or to remove the victim from the situation by distracting the bully from his efforts. Being a student’s buddy has students reaching out to another person, such as inviting them to sit at their table for lunch. Also, confront the situation doesn’t mean getting into a confrontation with the bully, but informing a teacher or adult of the situation.

“I thought he had a real practical message for the kids in ways they can try to intervene instead of just being a bystander,” Gordon said. “He also acknowledged how hard it is to do that and to go against what the crowd is doing.”

Murphy said 60 percent of all students believe kids who get bullied deserve it, so that’s the first hurdle to overcome. Also, bullies get away with their actions around 95 percent of the time.

“Our children know who, what, when and where this happens, because they see it every day,” Murphy said. “We hang up posters that say zero tolerance and we think that that is the answer to stopping them.”

Every seven seconds a teen is bullied in this country, with 250,000 bullied each month, he said. Also, he said 65 percent of teens don’t report it, which bring the monthly total closer to 500,000.

“I did the elementary school yesterday and after I gave the presentation the principal came up to me and he said, ‘Tom, you are so right, because I have a 4th grader right now in the nurse’s office pretending she is sick because she is being bullied by a little boy that was in one of your programs,’” he said.

Only around 5 to 7 percent of children in the school are really bullied, with around the same percentage acting as bullies, he said. In order for someone to be bullied, he said, it has to be habitual intimidation. There also has to be the element of the other person being smaller or weaker, he said.

“A lot of parents will think things are bullying, but they are really not,” he said.

When the word “bully” was first coined in the 1530s it meant “sweetheart,” he said. In the 17th century the word became distorted to mean harasser of the weak, which is where the term evolved to modern usage.

He teaches kids it is important to surround themselves with people that care about them and will push them to be better people.

“I gave your kids some real powerful stuff that is going to help them,” he said.

Social alienation, around 6 percent of bullying, is one way someone can be bullied and he said girls more commonly use this method.

“Girls are really, really good at doing it,” he said. “Girls will go out of their way to exclude other girls to hurt them.”

Before forming the organization prior to an anti-bullying talk Murphy was asked to give, he said he didn’t realize how devastating bullying could be for a child.

He said he had been to presentations where “the most awful, heinous stories have been told” and he said those stories need to be told, because there are some students in each school feeling the same.

Spotlight awarded in all areas