Residents get their money’s worth during debate 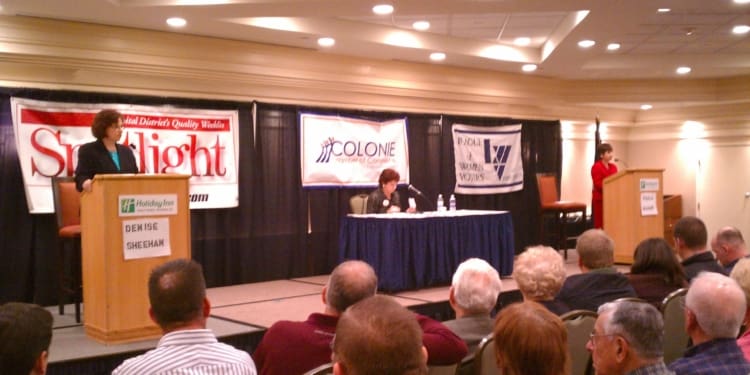 It is a rare moment when politicians actually answer the questions asked of them during a debate but Republican candidate for supervisor Denise Sheehan and incumbent Colonie Supervisor Paula Mahan did just that at the Holiday Inn on Wolf Road on Wednesday, Nov. 2.

The night was filled with a lot of information as both candidates came prepared to discuss the issues that were most important to the residents. The ever-popular topic of the operating agreement for the landfill was mentioned several times but was almost overshadowed by issues that came to the surface for the first time in this campaign.

A lot of the questions were centered on the town’s financial situation. Right off the bat, the first question dealt with the New York State mandated two percent tax cap on property taxes and asked how each candidate would deal with it. Mahan simply said that she already had accomplished what she set out to do, which was keep within the cap. In fact, she even decreased property taxes by half a percent.

Sheehan was not impressed, as she said the town’s assessed value had actually dropped by $60 million since Mahan took office and that real property taxes had also decreased. To meet the tax cap, though, Sheehan said she would make sure to have her accounting practices open to the public, so both she and the public knew how the town was fairing. This would be done through quarterly updates on the town’s finances, which would be made available to the public and not just the town board.

“We won’t be able to meet the challenges of the tax cap if we don’t know where we stand,” Sheehan said.

Mahan listed out some of her accomplishments that helped bring the town within the cap such as securing the town’s greatest asset, the landfill, by entering an operating agreement with Waste Connections, Inc. She also said that working with department heads on bringing down salaries and contractual services helped the town be in the postion it is today.

“We’re able to survive difficult conditions,” Mahan said. “I pledged that I will work within Governor Cuomo’s two percent tax cap now and in the future.”

“We have a trusting relationship with them,” Mahan said. “The local banks work with us.”

Sheehan pointed to her 10 years of experience working in the New York State budget division and said that she had the experience needed to make sure the town’s bond rating improves. She also said that banks don’t generally like to watch towns sell their assets or spend outside of their means, which she has been critical of Mahan for doing.

“I want to see the town bringing its spending line in with its revenue,” Sheehan said. “No fiscal gimmicks to balance the books. We need to take the necessary steps to get our revenue in line with our spending.”

There was also a large focus on bringing in new businesses and redeveloping vacant and abandoned parcels of land. It was an issue Sheehan constantly found herself mentioning as she said she would like to see the town not only work with businesses but also include its residents in the process.

For example, she pointed out the proposed Wal-Mart project that was denied last year sent a shock through the business community and gave the impression that the Town of Colonie was not a business-friendly town.

“The last couple of year has had a real chilling effect on the business community,” Sheehan said. “They are looking for a business climate that is working for them and the residents need to be included.”

Mahan said her administration has brought in $32 million in commercial and housing developments. She also said since she had been in office, the town has been able to streamline the planning process, a complaint she had heard from businesses before.

“The first question developers came in and asked me was to streamline the planning process because they can’t do business in Colonie,” Mahan said. “And we did that.”

The newly integrated town designated engineers was something Mahan was touting as an accomplishment throughout the evening, as she said it helped in streamlining the planning process to get projects such as the Fresh Market Plaza installed. Sheehan disputed that fact and said that it has actually slowed things down, and added things were much different when she was director of the Planning and Economic Development Department for 11 months in 2007.

“When I was planning director in that year we brought in 500,000 square feet in commercial development,” Sheehan said. “In the last four year, the town is still under 200,000 square feet of new commercial space. The town designated engineers were not born out of an improved tax base, businesses just see it as another step in the process… The town designated engineers has made the process more expensive and actually hasn’t improved the process.”