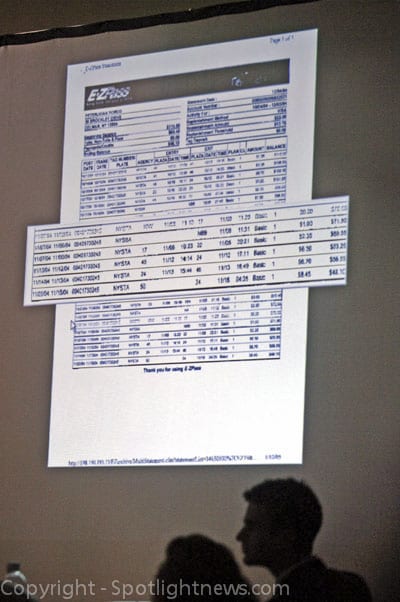 A forensic investigator for the New York State Police testified that Christopher Porco’s EZ-Pass was found stuffed inside the center console of his Jeep Wrangler when police performed an exhaustive inventory of the vehicle to collect evidence just days after the crimes against his parents at 36 Brockley Drive.

Investigator Kelly Strack said Porco’s Jeep was searched from dashboard to glove compartment to gas pedal in the hunt for clues.

Is it safe to say you were looking for blood? asked Prosecutor David Rossi.

Instead what police found was Christopher Porco’s EZ-Pass ` the device used for quicker passage through Thruway toll lanes ` jammed in the center console next to the loose change. Prosecutors believe Porco drove down the state Thruway from Exit 46 in Henrietta, outside of Rochester, to Exit 24 in Albany to kill his parents Peter and Joan Porco before returning back on the Thruway to the University of Rochester campus as students were waking for class.

The EZ-Pass in Porco’s vehicle was used prior to the Nov. 15, 2004 attacks on the Porcos, on Nov. 12 and 13 of 2004, according to Eric Christensen, Thruway Authority operations manager. Porco’s EZ-Pass with tag numbers 00401730245 registered when he drove from Rochester to Albany to see his then-girlfriend Sarah Fisher that weekend.

Prosecutors believe that on Nov. 14 and 15, Porco removed the EZ-Pass located above the rear view mirror inside his car and paid for tolls using manned toll stations from Albany to Rochester and back. Two toll booth operators at Exit 24 and Exit 46 earlier testified they saw a yellow Jeep Wrangler drive through their lanes at times before and after the attacks occurred.

The Jeep was ripped from top to bottom by police, but Defense Attorney Laurie Shanks reminded jurors that no blood from Peter and Joan Porco was ever found.

`You took all this evidence and found no blood in the Jeep,` said Shanks.

`I believe there was blood from one of the items, the blood of Christopher Porco on his shirt,` Strack told jurors.

`If you take an EZ-Pass and stick it somewhere else, there is no guarantee it won’t read in the car,` Kindlon said.

Police seized Porco’s Jeep Wrangler on the day of the crime and hoisted it on a flatbed truck to take to State Police Troop G in Loudonville. Even though Porco’s EZ-Pass at that time was inside the center console, it registered leaving the Rochester toll station but not as it passed through the Exit 24 Albany tolls.

Testimony on Monday, July 24, also centered on Porco’s failing grades at the University of Rochester. Prosecutors believe Christopher Porco was obsessed with re-entering the university in the fall of 2004, just one year after he was asked to involuntary separate because of failing grades.

After Porco was brought back home by his parents, he enrolled in classes at Hudson Valley Community College, but never attended and received failing grades. He then forged his transcripts and sent the illegal document back to the University of Rochester with a letter asking for readmission. Prosecutors were not able to elicit testimony regarding Porco’s forged HVCC transcripts from the spring of 2004.

`I will not permit it to come in,` said Judge Jeffrey Berry presiding over the trial. `Neither Joan or Peter Porco knew of the forged transcripts at the time of the Nov. 15, 2004 attacks,` the Judge added.

Chief Prosecutor Michael McDermott argued to Judge Jeffrey Berry that his opening statements to the jury on June 28 announced that Christopher Porco forged his transcripts, and now jurors will not be able to hear why.

`The HVCC transcript is interwoven with deceit and deception this defendant engaged in,` said McDermott.

Krauss explained to the jury that when Porco re-enrolled in the fall of 2004 he soon struggled academically again.

`His calculus professor notified the registrar’s office he had no written work registered for Mr. Porco, and that the student never attended his course,` said Kraus. Porco never met with Kraus that fall even though he was asked to on several occasions.

University Bursar Karen Gorton testified that Porco’s fall tuition bill of $17,126 was past due in October 2004 and the defendant e-mailed a response back that the money was on its way.

`He said, ‘I am waiting for a loan to clear and I will pay it in the next few days,’` said Gorton. The loan Porco was waiting for was from Citibank in the amount of $31,000, on which he forged his father’s name as a co-signer.

Assistant District Attorney David Rossi asked Kate Crowley, the director of network communications at the university if any calls were made from the phone in Porco’s doom room on the day of the crime, Monday, Nov. 15.

`Three calls were made, one at 3:11 p.m., a 38-second call at 4:03 p.m., and a third lasting four minutes at 4:04 p.m.,` said Crowley. Two of those three calls are believed to be calls Porco made to the Bethlehem police to find out if his parents were dead on the afternoon of the crime.

Before testimony began on Monday, July 24, Berry asked why there was a shift of witnesses from Friday’s court proceedings to Monday.

`All of a sudden you’re coming in with all these other witnesses,` said Berry. `I would prefer we stay on the same course of things.`

Prosecutors wanted to bring in college professors employed at the University of Rochester to verify Porco was performing poorly in school.

`These professors are in California, Arizona and Canada, and some are not available this week,` said McDermott.

The prosecution’s case is expected to be finished by early next week.

Johnathan testifies; Porco brothers don’t look at each other