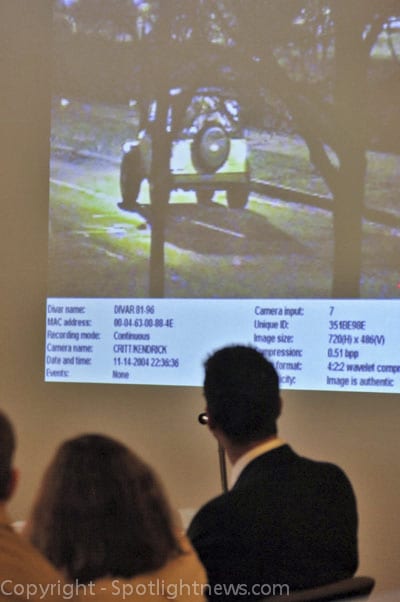 The jury in Christopher Porco’s murder trial viewed a costly high-tech display from a forensic video expert utilizing 10 large-screen monitors inside the courtroom to identify the defendant’s exact location in November 2004 as he drove through the streets of Rochester.

The Albany County district attorney’s office hired Grant Fredericks of Avid Technology at a $250 an hour fee. Fredericks was asked to break down a few seconds of security camera footage captured outside the campus of the University of Rochester on Nov. 14 and 15, 2004, the night before and the morning after the attacks on Peter and Joan Porco at their Delmar home on Brockley Drive. Peter was murdered and Joan survived severe injuries; their son Christopher is on trial for murder and attempted murder.

The first task is to extract the data, the next task is to determine what the data is, Frederick explained in court on Tuesday, July 18.

Jurors viewed four separate pieces of tape showing Christopher Porco driving his yellow Jeep Wrangler out of the University South parking lot in front of Munro Hall on Nov. 14, and traveling off campus to the intersection of Kendrick Road and Crittendon Boulevard in an eastbound direction. Prosecutors believe Porco used this route to get to Thruway Exit 46 in Henrietta and make his way east on the Thruway toward Delmar to attack his parents.

Another segment of security camera footage taped on Nov. 15, 2004 shows Porco traveling back on Kendrick Road and Crittendon Boulevard toward the university campus.

Prosecutors believe Porco left the Albany area around 5 a.m. on Nov. 15, 2004 after Peter and Joan Porco were attacked and made it back to Exit 46 at 8:18 a.m. Judge Jeffrey Berry would not allow the time data on the camera footage into the records as evidence until other employees from university campus security testify to its authenticity.

`The defense is fighting tooth and nail every step of the way, but I am confident we will be able to establish that timeline,` said Chief Prosecutor and Assistant District Attorney Michael McDermott.

`I think the jury realizes the defense is nitpicking and their time is being wasted,` he added.

It was a hot, 90-degree day outside in Goshen and warm inside the courtroom as well because the Orange County Court building ventilation system was not working at full power.

`Thirty years ago I worked for a judge whose name was Murphy and he would always tell me about Murphy’s law,` said Judge Berry. `Our Murphy’s law today is the ventilation system.`

There were times during Frederick’s testimony that Christopher Porco could be seen taking several drinks of water from a plastic cup while also closely viewing the same tape the jury was watching of his Jeep leaving the university campus.

The defense team, led by Terence Kindlon, said prosecutors proved nothing except that the expert witness cost Albany County taxpayers $10,000 so far just to testify.

`Your travel is being paid for by the taxpayers of Albany County,` Kindlon queried.

More motions were filed by the defense to preclude much of this week’s testimony. Kindlon told Berry that much of the prosecution’s witness testimony comes from an illegal and unconstitutional interrogation of Christopher Porco by the Bethlehem police department the night after the murder with much of their witness testimony.

`We are going to make a motion to preclude such evidence,` said Kindlon.

Berry told the defense it is entitled to its motions and applications, but they are denied.

`It is clear in testimony the people have established the defendant’s whereabouts independently of the videotape through established testimony,` said Berry.

Computer technology specialists were scheduled to be called on Wednesday, July 19 to tell how they extracted several hundred e-mails exchanged over the computer between Christopher Porco and his parents. The e-mails cover a time period between January and November 2004 and are expected to show the personal and financial problems Christopher Porco had while attending the University of Rochester.