Retiring Retirement: One thing leads to another 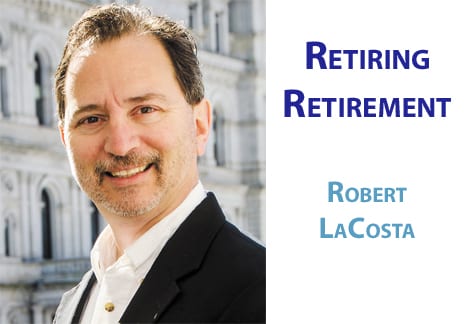 When Frank DeSorbo left behind his school administration career, he couldn’t have guessed that “retirement” would keep him running more than his work as a basketball referee.

The 68-year-old from Delmar would also tell you that he couldn’t have dreamed of where his interests would eventually take him.

Since leaving his full-time job, DeSorbo has worked for software consultants, served as interim superintendent of schools, penned the “Veteran Next Door” newspaper column (see page 11), started a weekly veterans group and, if that wasn’t enough, presides as president of the Capital District Patriot Flight, Inc., which takes day-long trips to Washington, D.C., to visit their war memorials.

“One thing led to another,” he said, as if that could be a tagline for his retirement. “I have a lot of education behind me, and yet I found myself shoveling horse manure because I got involved in thoroughbreds.”

No matter how big or small the job, DeSorbo insisted that, “The biggest enemy retirees face is the rocking chair.”

The Patriot Flight presidency has brought him to groups of all kinds, where he has shaken hands in senior centers, vets groups, independent living centers and even high schools.

His message is always the same. “Patriot Flight is about recognition and remembrance,” he said, “and it takes finances to keep it going.”

DeSorbo recalled noticing the inflection in the voice of a Normandy Invasion pilot whose heart had been broken for the guys down on the beach. You never know what’s behind those older eyes under the cap that reads “veteran.”

His column “Veteran Next Door” says it all. They might be closer than you can imagine. Sometimes they wear a hat, and sometimes they don’t. But you can be intentional about spotting them and telling them they are not forgotten.

It will probably make their day, just like DeSorbo’s work does every day.

To help send a vet to visit his memorial, contact DeSorbo at Patriot Flight at 439-9265. They gave us our flight to freedom. Now, it’s our turn to give them a ticket to a flight.

Social Security Corner: Hit a home run when it comes to savings