Getting seniors hooked on fishing 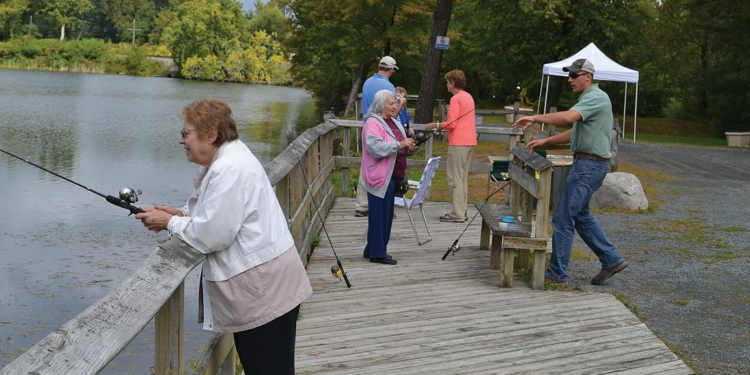 Many people who go fishing can tell you all about how relaxing it can be, and it’s not too late for those who don’t fish to enjoy those same benefits.

The Department of Environmental Conservation on Tuesday, Sept. 16, from 10 a.m. to 2 p.m. held a fishing clinic at on the Six Mile Waterworks for seniors, teaching angling basics and exposing them to a potentially new hobby.

The DEC provided rods and tackle and waived fishing licenses for participants.

“Fishing is the perfect activity for seniors who often have more leisure time than the rest of us. It’s also a great way for seniors to connect with their grandkids,” said Greg Kozlowski, from the DEC bureau of fisheries.

The DEC had been holding open fishing clinics since the 1990s, but they were primarily for underprivileged kids or those from urban settings who often don’t have the means or know-how to go fishing.

For the first time this year, the clinic was just for seniors.

The event was posted in the Menands newsletter and the four senior clubs in Colonie were also notified — Thunder Road, Silver Streakers, Heart and the Beltrone Living Center. Kozlowski said he had expected 17 participants, but after the early morning rain and clouds, only seven made it out.

One woman, fishing for her first time, was not going to be deterred by the weather.

“A lot of people didn’t show up because of the weather,” said first-time angler Mary Colello of Colonie. “I said, ‘I don’t care if it rains, I’ve got my chair and my umbrella.’ I’ll stand here all day.”

Early in the morning, a man caught a 17-inch largemouth bass, but most of the anglers were catching sunfish and having a blast. Kozlowski said that catching anything is important to get people interested in fishing, and that’s the kind of fishing offered at Six Mile Waterworks.

“There are three stages of fishing: catch any fish, catch a lot of fish and catch the most difficult fish, and right now, they are in the ‘catch any fish’ stage,” said Kozlowski.

Seniors are the new focus group for the DEC because the organization wants people to know that one of the world’s oldest hobbies is about a lot more than just catching a trophy.

“The main thing is that it’s not always about catching a ton of fish; it’s about being outside and spending time with friends and family,” said Joelle Ernst, a fishing promotions biologist with the DEC.

Ernst said one of the things the DEC is looking to do is to get more people interested in fishing and outdoor activities, which is increasingly difficult in this tech age.

The seniors who made it to the clinic said they had a blast, and they participated in a friendly competition to see who could catch the most fish. Three of the seniors caught their very first fish.

Some called for a repeat of the clinic.

“It (fishing) sounded exciting, and I’d never done it before. … I’m going to ask if they’ll do it again next year in the spring, and I think maybe it’ll bring more people out,” said Joan Fisher, of Colonie.

Voorheesville opts back in to federal lunch program