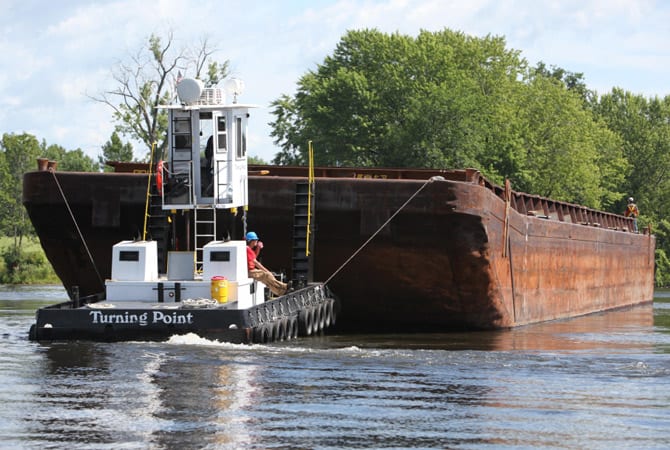 HUDSON RIVER—The New York State Department of Environmental Conservation (DEC) announced that it has renewed its call for the U.S. Environmental Protection Agency (EPA) to require additional sediment sampling for Polychlorinated Biphenyl (PCB) contamination in the upper Hudson River following the remedial efforts of General Electric to remove thousands of pounds of PCBs from its riverbeds.

In 2002, GE was ordered to clean up a 40-mile stretch of the Hudson, from the Troy Lock to Rogers Island, by dredging millions of cubic yards of contaminated sediment at the bottom of the river. Dredging began in 2009 and the project was completed in 2015. A five-year project review by EPA is due to be released in April of next year, but DEC, the National Oceanic and Atmospheric Administration and other environmental organizations have warned that the dredging project hasn’t lowered PCB levels enough to meet targets set out in the original cleanup plan.

In a letter to EPA Regional Administrator Judith Enck, DEC Commissioner Basil Seggos expressed a need to expand the analysis of sediments by more than 1,400 samples in the Upper Hudson River, both in areas that were dredged, as well as those that were not, in order to determine the effectiveness of the dredging.

“As Department staff has been explaining to EPA for many months,” he wrote, “much more sampling is necessary in order to answer the questions many stakeholders have raised about what has been left behind by the remedy.”

Under the Comprehensive Environmental Response, Compensation, and Liability Act (CERCLA) and the National Contingency Plan (NCP), EPA is required to monitor effectiveness of the remedy to affirm that it is meeting the goals set by the federal Superfund Record of Decision (ROD). Currently, the agency plans to collect only 375 samples—fewer than 10 for every mile of river. DEC has deemed those plans inadequate and said they would not provide enough data to assess the effectiveness of the remediation. According to DEC, at least 1,800 samples are needed to have the statistical power to draw accurate conclusions. EPA has repeatedly eschewed requests by DEC for additional sampling, thus prompting the Nov. 15 letter. DEC is demanding a response from EPA within 10 days and said it will step in to undertake the analysis in the event that EPA fails to do so.

“The EPA is apparently unwilling to modify the scope of sediment sampling under the Operation, Maintenance, and Monitoring (OM&M) Program,” Seggos wrote to Enck, “even though EPA admitted in its first five-year review that portions of the river, especially in River Sections 2 and 3, are much more contaminated than EPA originally predicted.”

“The clock is ticking. EPA’s work is not done and its unwillingness to require GE to perform adequate sediment sampling undermines the five-year review process underway,” said Seggos in a statement. “That is why New York State is demanding that EPA undertake more comprehensive and scientific sampling no later than the spring of 2017. If EPA fails to act, DEC is ready to step in. And until such sampling occurs, the EPA must not deem the remediation project complete.”

In 1976, DEC banned all fishing in the upper Hudson because of health concerns with PCBs, which are thought to be responsible for health issues that include neurological disorders, lower IQ and poor short-term memory, hormonal disruption, suppressed immune system, cancer, skin irritations, Parkinson’s disease, ADHD, heart disease, and diabetes. PCB contamination in humans may come from drinking the contaminated water, absorption through the skin, eating contaminated aquatic life, and/or inhaling volatilized PCBs. PCB contamination is especially dangerous for pregnant and nursing women.

If remediation objectives will not be achieved in the timeframes specified, DEC is calling on EPA to identify specific areas of the Upper Hudson River that may require further dredging.

“By allowing so much PCB contamination to remain in the River, the EPA has turned its back on the health of thousands of New Yorkers, many of whom represent immigrant, low income and minority communities who regularly eat the fish they catch for sustenance,” said Aaron Mair, President of the Sierra Club. “Committing to a full clean up of the Hudson River is the kind of justice these communities deserve.”