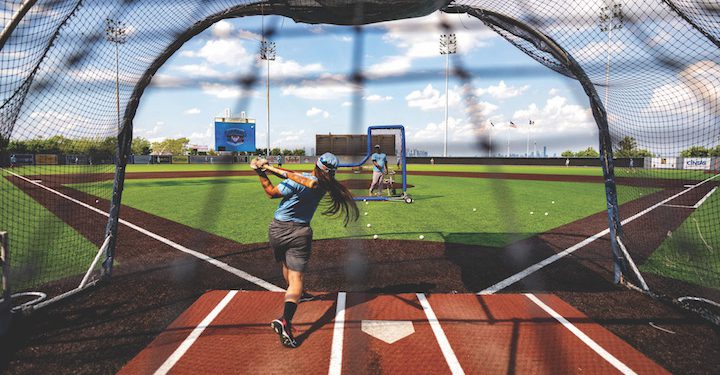 GUILDERLAND– “Ever since I was old enough to hold a bat, or hold a baseball card, or see a game on TV, I’ve been interested,” said Timothy Wiles, Director of the Guilderland Public Library. Since his childhood until the present, baseball has been his life’s passion.

An influence on him was his great-grandfather Benjamin Caffyn, who played fifteen years in the minor league and one in the majors, playing for the Cleveland Guardians, known then as the Cleveland Naps. “Everyone in the family was influenced by that, we’re all baseball fans,” he said.

Currently he is lending his baseball expertise to Grassroots Baseball, an organization founded by sports photographer Jean Fruth and Jeff Idelson, the former president of the Baseball Hall of Fame. The organization is dedicated to promoting and celebrating baseball at the grassroots level.

“Our program’s mission is to celebrate the game of amateur baseball around the globe, with part of its pursuit including giving back to underprivileged communities by introducing baseball at the youngest level,” said Jean Fruth.

“In the first one, they traveled around the country and around North America and Central America, taking pictures and writing stories about baseball at the local level,” he described.

“In the Route 66 book, they traveled across historic Route 66, which goes from Chicago to Southern California, and photographed baseball all through those areas,” he continued.

“We spent three years along the route, staging clinics and promoting every level of the amateur game, from kids playing t-ball to old guys playing vintage baseball, from high school state championships to the minor leagues, the game played on Native American Reservations, and all-girls baseball,” said Fruth. “This journey is how our second book, Grassroots Baseball: Route 66, came about.”

“I wanted to grow the book into something more,” said Fruth. “Three years ago, I reached out to Jeff Idelson, with whom I had worked and who had just announced his retirement from the National Baseball Hall of Fame and Museum, to ask if he would be interested in forming a nonprofit.”

“It’s important to give a voice to the amateur game,” said Fruth. “You hear so much in the news about how kids aren’t playing baseball anymore. Well, they are, in small towns and big cities— and if we can lend a hand in promoting and celebrating those stories, it leads to more attention and more involvement in building the game. For women, this is especially important.”

The third book will highlight women and girls in baseball. “Now that we have wrapped up Route 66, our women’s project has our full attention and will be our mission for the next three years,” said Fruth.

“Jeff brought me on as a researcher and a writer,” said Wiles. “What I hope to be doing is not only interviewing the key women in the game today, but also shining a light on the history of women and girls in the game, which is often overlooked and little known.”

Wiles’ interest in the subject of women in baseball began with his work at the Baseball Hall of Fame. He interned in 1990 and was intrigued after reading an interview with a librarian there.

“I had always enjoyed libraries, but it had never occurred to me to work in one,” he said. “I was thinking, ‘Wow, they have this library at the Baseball Hall of Fame with three million items in it, and they’re all about baseball. That sounds like heaven!’”

He pursued a degree in library science. In 1995, he returned to the Hall of Fame. “I started as a reference librarian.” After a few years, he became Director of Research. “What I would do is coordinate a staff of people who did historical research on baseball.”

“In 1992, the movie A League of Their Own came out,” he said. “When I came back to the Hall of Fame in 1995, I found that there was a lot of interest now in the history of women playing baseball, which is not just limited to the era of that film but has been going on in one way or another since the 1860s.”

“There weren’t people who were interested in the subject, particularly in the staff,” he remembered. “I kind of gravitated toward that because we were getting a lot of letters from school kids and a lot of phone calls from people. People would say, ‘My aunt just died; she played in this baseball league, and I’d like to learn more about it’.”

He added, “My specialty became women’s and girls’ baseball. Then I started to meet people who played or were playing.”

Most recently for Grassroots Baseball, he wrote about Kelsie Whitmore, the pitcher and outfielder for the Staten Island FerryHawkes. She is the first woman to sign with a professional team associated with Major League Baseball.

“Baseball is not new to women: the door has opened and closed throughout history, starting with the Resolutes, the first all-women college baseball team from Vassar College in 1866,” said Fruth.

“Fast-forward to 1943 and the start of the All-American Girls Professional Baseball League— while Major League players went off to war, scouts traveled the country finding the best women softball players and converting them to play in a new all-women baseball league.

“It’s important to remember and share that history as we tell stories of women today who are trailblazing in every facet of baseball, including executives, including team presidents and baseball operations staff building rosters, head groundskeepers, trainers, managers, coaches, and players.”

“It’s an exciting time, and we hope to tell those kinds of stories as well. Not just girls playing the game, but also experiencing the game, contributing to the game, and writing about it,” said Wiles. “There are no limits to the ways that women can be involved in baseball, and we want to capture those stories.”

“The more success stories we can share about girls and women in the game, on and off the field, the more support there will be financially and culturally, providing a better and more open road to success for girls and women in baseball,” said Fruth.

“We couldn’t be more hopeful and excited for the future of Grassroots Baseball and the amateur game,” she added.

“When we talk about grassroots, the name of the organization is Grassroots Baseball, but there’s also the generic sense of the word grassroots, which is baseball at the local level, in small towns,” explained Wiles.

“Grassroots is where it all starts. It’s before money and contracts. It’s about the pure love of the game,” said Fruth. “It’s where I got my start as a photographer, and it is our favorite part of the game.”

Wiles commented, “One of the greatest things anyone ever wrote about baseball was ‘Whoever wants to know the heart and mind of America had better learn baseball..’.”

Wiles continued, “The man who said it was a Frenchman named Jacques Barzun. It’s a beautiful line, but it goes further. ‘…the rules and realities of the game, and do it by watching first some high school or small-town teams.’”

“I think that’s the spirit behind Jeff and Jean’s project.”

“We hope that the stories we share will educate or inspire others to get involved in supporting or playing the game in communities around the globe,” said Fruth. “We want to continue to provide opportunities and inspire to grow the game. That’s how it happens. It’s a revolution!”