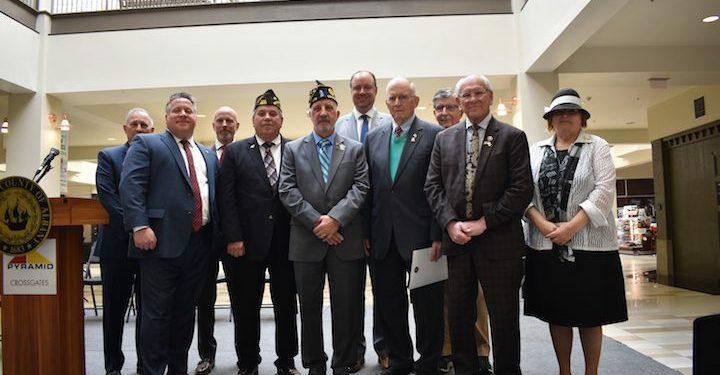 Michael G. Breslin, Leo J. Falconio and James J. Haas, Sr. were each honored at a ceremony on held on the first floor near 110 Grill.

“Albany County has had a proud history of its residents serving our state and country. They have put their lives on the line for their community, and we want to make sure they know that their service has not gone unnoticed, said McCoy through an email statement, describing the veterans as “exceptional individuals who have bravely served our country.”

After returning home, Breslin was an attorney for more than thirty years and he later served as Albany County Executive from 1995 to 2011. Breslin is an active member of the veteran community, which includes his current membership of the Joseph E. Zaloga American Legion Post #1520.

Leo J. Falconio is a veteran who served in the United States Navy as a boat engineer aboard the USS Nitro AE-23. When he returned, he worked as a refrigeration repair service technician at a Burger King franchise for over 20 years and continues his work at Stewart’s Shops starting in 2010.

James J. Haas, Sr. is a Vietnam War veteran who served in the United States Air Force as a Security Force Specialist with the 366th Security Police and the 18th United States Army Police. He received many military awards and commendations for his service to the country.

Haas, Sr. has been married to his wife, Kathy, for 50 years, has three children, and five grandchildren. He worked for 23 years at The Supreme Chocolatier Company of Staten Island and retired as a Vice President of Sales.