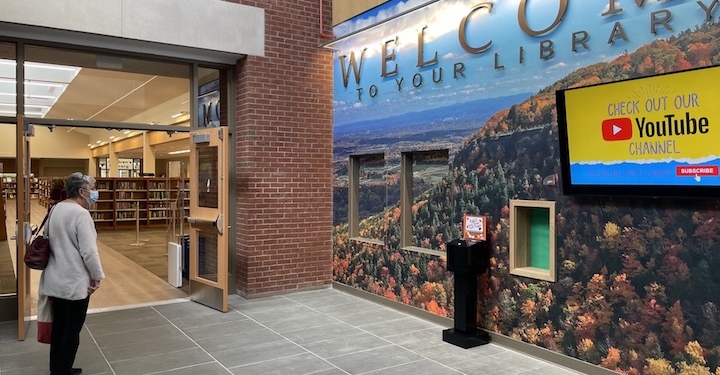 GUILDERLAND – Some good, indeed, has come from 2020. The Guilderland Public Library’s building project started construction in October 2020 and then finished the 6,555 square foot expansion this past September, ahead of schedule and under budget.

The $8.3 million project finished nearly one year ahead of schedule and about $250,000 under budget, library officials said.

The addition to the library focuses on a Children’s Library with a heated floor, natural light from a skylight, a craft activity area, and nursing area. There is a 540-gallon aquarium with 12 varieties of fish that makes a border between the children’s section and the main library.

It was determined that it made sense to focus energies on children’s resources based on public input sessions, said Luanne Nicholson, the public information officer for Guilderland Public Library. There was significant demand to add space for children’s programming.

Now, in addition to a large dedicated space for children’s programming, there’s also a teen room called The Foundry.

With the new space, there is a large area that will eventually be able to accommodate 300 to 400 people for popular concerts, speakers, and children’s programs.

In the meantime, 100 people are currently allowed in the building as the library continues to follow COVID guidelines. Eventually, the total building capacity will be 800 people.

With cooler weather here, the library is equipped with a cozy space with a gas fireplace, complete with a historic mantel from Fuller’s Tavern.

There are four new study/meeting rooms in the library, a cafe, and unisex single-stall bathrooms.

The main library building dates back to 1992, while the public library’s founding occurred in 1957.

The new building addition is complete, but there are some minor projects still ongoing (like new computers and hearing assistance tech). The new computers are expected this fall, but other items will depend on any supply chain delays, said Nicholson.

A ribbon cutting was held on September 24th to mark the completion of the new addition. Butler Rowland Mays Architects, LLP, a Ballston Spa firm specializing in library renovation, and Turner Construction Company were the main entities working on the project.

The library has projected that, with green initiatives and additions, they will utilize about 20 percent less energy even though the building space will be larger.

This will be accomplished through: maximizing natural light, utilizing occupancy sensors, energy efficient appliances in the bathrooms, ductwork modifications, and an HVAC system addition.

Comparing with the 2012 Project

Work on this project started in earnest in 2018, revamping a 2012 proposal that was defeated by the public.

The public approved the latest project iteration in a referendum in the Spring of 2019, with 1,861 voters (about 58 percent) in favor, and 1,329 (about 42 percent), against. The referendum proposal presented in May 2019 which Guilderland voters approved was more modest than the 2012 plan: about 6,000 less square footage, and $4.6 million less, keeping the building on one level, said Nicholson.

Currently, the library has 15,698 registered borrowers, about 44% of Guilderland’s population

of 35,752, said Nicholson, noting that stats from the past year are off, due to COVID service disruptions.

She added that curbside checkouts, which begin in June 2020, have proven to be popular and convenient and continue as an option, in addition to in-person browsing and checkouts.  Meanwhile, demand for digital content skyrocketed during the pandemic,

especially March-June 2020, when the library was closed and physical checkouts were

The library issues about 1,100-1,200 library cards per year, on average, Nicholson said.

The Guilderland Public Library is located at 2228 Western Ave. in Guilderland. More information about the library can be found on their website.