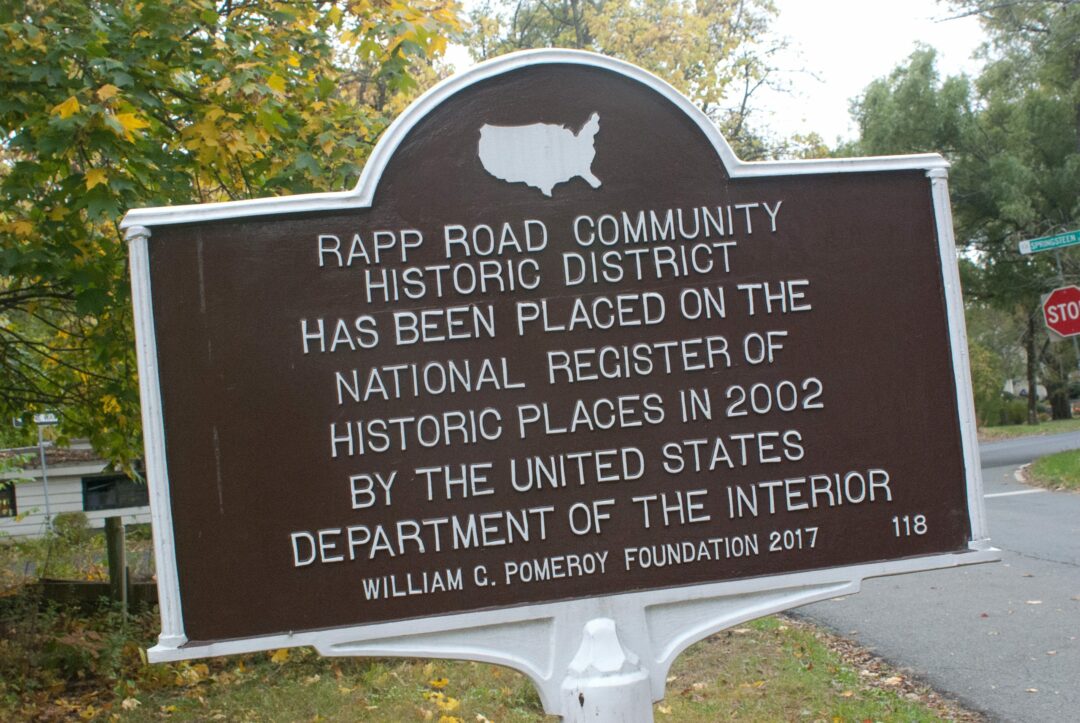 This historic marker from 2017 acknowledges how The Rapp Road community still thrives after almost a century. Diego Cagara / Spotlight News

ALBANY — Beyond Crossgates Mall and north of the boundary between Albany and Guilderland lies a quiet 14-acre residential neighborhood on Rapp Road that bears great historic significance.

Its origins trace back to the early 1930s during the Great Migration, a period where six million African-Americans left the rural South for more urban areas in the Northeast, Midwest and West to escape racial segregation, the Jim Crow laws, and inadequate living and economic conditions.

Jennifer Lemak, the chief curator of history at the New York State Museum, said in 1927, Reverend Louis W. Parson and his wife, both African-Americans, drove from Shubuta, Mississippi to settle down in the South End of Albany. Parson was a preacher and had led a religious community back in Shubuta. Right before the move, she said Parson had earned a large cash settlement prior from being injured in the logging or railroad industry, which he used to buy a car and leave Mississippi as he did not feel comfortable being an injured black man with money in the South.

Once in Albany, Parson began a group prayer circle and a storefront Pentecostal church in the South End, called First Church of God and Christ, Lemak said. As he continued settling down there, Lemak said, “Because he had a vehicle, he went back and forth from Mississippi to Albany to transport more people from his community back there. He did that a bunch of times and at some point, one of the people he brought to Albany ended up buying a bus who brought in more people.”

Beverly Bardequez, the Rapp Road Historical Association president, said, that Parson’s community, however, did not like how bars, brothels, prostitution and gambling were prevalent in the South End. This inspired Parson to buy 28 acres of land in the Pine Bush area in the early 1930s — where Rapp Road is located now — and move there with his community.

“They started building their own homes and they’d get and salvage materials from torn-down buildings in Albany,” Bardequez said. “They built their foundations by hand and the men in the community combined their skill sets to build the bungalows that are now there. You look at them now and don’t think much but it’s significant for replicating what they’d known in the South.” Lemak similarly said that the houses’ architecture resemble those found back in Shubuta.

At its peak, 23 families called Rapp Road their home by the 1950s; over a dozen still do today. However, the state acquired the northern half of the community’s land in 1971 to construct the Washington Avenue Extension, according to Lemak, and while those affected mostly moved away, one of the houses was physically moved to the southern half, where the remaining 14 acres of the community still exist today.

The community later became recognized as a historic district at the state level in 2002 and national level in 2003. “We were thrilled about the recognition. Jennifer Lemak and my aunt, Emma Dickson, had worked together to research the community’s history and presented it to the state Parks Recreation & Historic Preservation Office,” Bardequez said. “They helped get it nominated to the State and National Registers eventually.”

However, development continues to threaten the historic community. In December 2018, Pyramid Management Group, Crossgates Mall’s owner, proposed to build 222 apartments and townhouses southwest of the intersection of Rapp and Gipp roads. While this proposal has not moved forward, Bardequez said it could have increased unwanted traffic around Rapp Road. “We’ve been working with the city of Albany to try to figure out a way to reduce some traffic,” she said. “That’s a major concern for us and we’re trying to work with all stakeholders to try and find a solution.”

She also brought up how in just the last two years, the community received a historic marker, now located at the intersection of Rapp and Springsteen roads, through a state grant. “We’re looking to do more things to maintain the community and … my biggest concern is that houses there are left unattended and we want to get them back in good form,” she said. One such way has been the formation of the Rapp Road Historical Association, a resource for information about the community and residents’ stories.

“I just would like my children and my children’s children to say this is where our ancestors settled and be able to come here and appreciate what they did to create this settlement,” Bardequez concluded. “They basically came here with clothes on their back and not much money literally. They created something out of nothing.”

LETTER to the EDITOR: Thank you