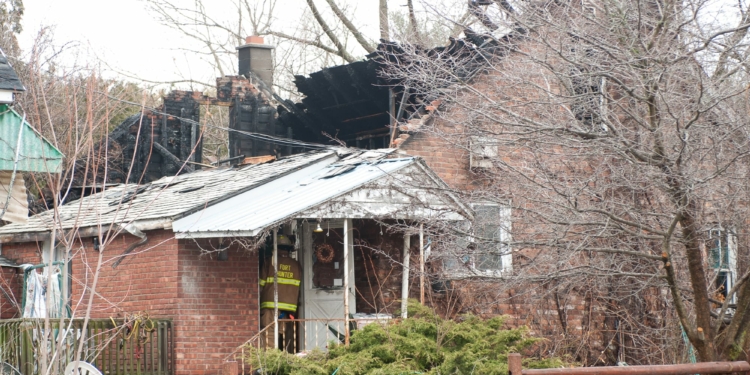 A fire at 2973 Curry Road on Tuesday, April 4. (photo by Jim Franco/Spotlight News)

GUILDERLAND – The homeowner of a 2973 Curry Road home destroyed by fire on Tuesday, April 4 is luck to be alive.

His many cats, frightened by the blaze that started sometime after 5 a.m., were scampering around the house and that’s what woke him up, said Fort Hunter Fire Department Asst. Chief Greg Comparetta.

There were no working smoke alarms in the house.

“Homeowners was lucky to have woken up by the cats and lucky he managed to get out,” he said. “It’s a good time to remind everyone to have working smoke alarms on every level of the home.”

He said there were at least 10 cats living at the house, and that three or four may have died in the fire.

The homeowner, Tom Toth, was treated at the scene by the Western Turnpike Rescue Squad for smoke inhalation.

Efforts by firefighters were hampered by the lack of water.

Fort Hunter, the first at the scene, was making headway battling the blaze but the tanker ran out of water and had to travel some three-quarters of a mile away to Morse Road to the nearest hydrant to fill up.

Other tankers from other departments were called, but as they were travelling the fire continued to burn.

“The first line got in and knocked it down but they ran out of water fairly quickly and the fire flared back up,” Comparetta said.

The fire started in a bedroom on the first floor but the cause will likely remain “undetermined,” Comparetta said.

He said the house appears to be a total loss.

LETTER to the EDITOR: Recollect just a power grab by town