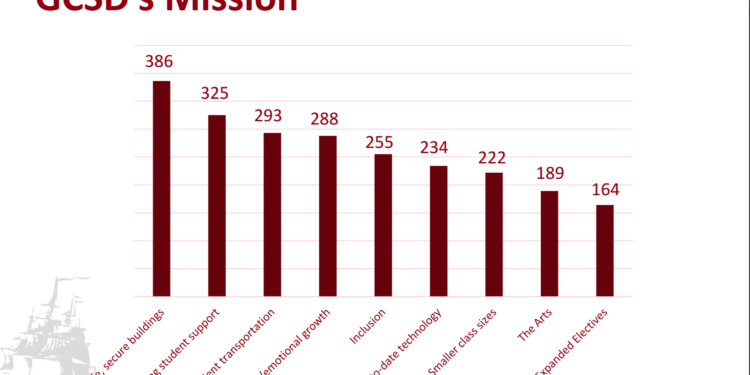 GUILDERLAND — Residents of the Guilderland Central School District (GCSD) have now had two chances to weigh in on the development of the district’s budget for the 2017-18 school year. The district serves approximately 5,000 students and encompasses most of the town of Guilderland and part of the towns of Knox, New Scotland and Bethlehem in Albany County.

Public input was solicited last fall, prior to a three-month process during which each school and department developed individual budget requests which were then reviewed by district administration. In early 2017, GCSD began to seek input from the community again, in advance of the budget proposal presentation on Tuesday, March 7. The district rolled out a public survey online and then invited residents to attend a public information meeting to share their thoughts.

According to the district, 1,037 individuals participated in the survey: 809 school community members and 228 GHS students. Of the 809, 454 have currently enrolled students and 352 are district employees. GCSD, which is still parsing the results of the public input, have identified areas that participants consider essential to the district’s mission, which, as stated on its website, is: “To inspire all students to be active life-long learners, able to achieve their highest potential in a demanding and ever-changing global community.”

GCSD proposes to do this by providing “a safe and welcoming environment, where students, parents and staff are joined in the pursuit of academic excellence and personal growth,” where it “shall provide a rich and rigorous education for all learners that, upon graduation, they are poised, capable and ready to meet the developments, challenges and opportunities of their future.”

A majority of parents and students agreed that safe and secure buildings are the top priority — 59 percent of parents and a full 78 percent of students. Academic support was the second most important priority for parents, with 52 percent, but was not represented in the top three student priorities, which included safe transportation (51 percent) and increased elective opportunities (49 percent). Transportation came in third for parents, at 46 percent.

Academic support and emotional support — both with 59 percent — were the top two priorities among district employees, 66 percent of whom were teachers. Smaller class sizes was third, with 57 percent.

The budget proposal released on March 7 is expected to represent an increase of 1.08 percent over last year, for a total of a little more than $97.6 million. The tax levy limit has been calculated at 2.7 percent, or $71.4 million. According to the district, using the governor’s figures for school aid, GCSD received a little more than $23.9 million last year and the plan for this year allots approximately $25.2 million, a 5.6 percent increase.

If it receives the full amount of Foundation Aid legally owed by the state, the district would receive an additional $4.3 million in funding.