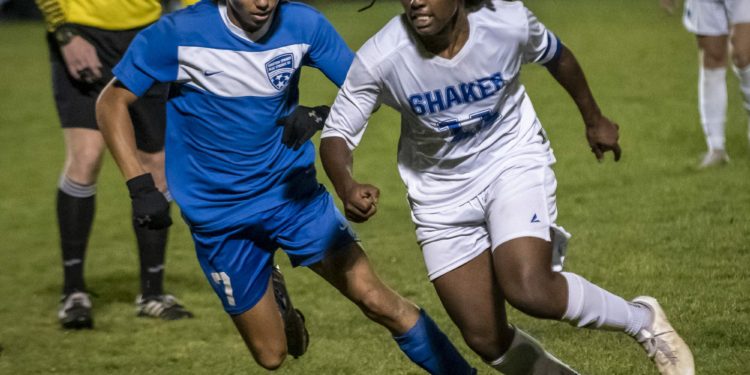 With the score knotted at three after regulation, it took about two minutes for senior midfielder Ben Halek to split the Blue Streaks’ defense, barrel towards the net and get sandwiched down in the box. Halek was awarded a penalty kick and blasted into the top left corner of the goal past the diving Saratoga goalkeeper Ben Van Valkenburg.

The goal was the end of a hard-fought battle between the two state-ranked teams. Saratoga came into the match ranked second in the state, while the Blue Bisons were ranked seventh.

The game was a back and forth stalemate between the rivals until 28:47 left in the first half when junior forward Ryan Farr put Saratoga on the board. It was the first of three goals for Farr to find the back of the net.

The defense on both sides held up a flurry of attacks until 22:06 left in the second half when sophomore forward Kofi Sarfoh headed the ball into the net on a feed from Nick Pepe. At 13:01 Sarfoh led senior forward Brendan Degan with a long feed which Degan jammed past the Saratoga keeper putting Shaker up by two goals.

But Farr was not done, heading the ball in off a cross from senior midfielder Lucas Varghese with 8:47 left and tied the game with 2:14 from a pass from Vincent DeVito.

Shaker heads to the regional finals on Saturday, Nov. 5 at 5 p.m. against Cicero-North Syracuse at Lasalle Institute.

To see the gallery, click on a photo below and click/swipe through the rest. If you are viewing in a news app, click here to open the gallery.