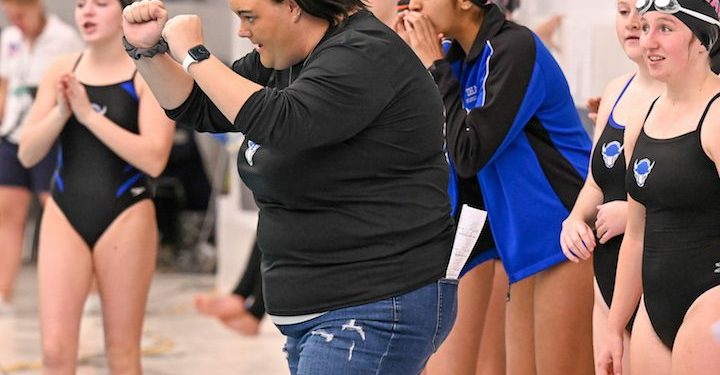 Maggie Callesano has been the Shaker High girls swim coach for seven years, the boys head coach for three years, before transitioning to the boys assistant swim coach for the last three years and the modified head swim coach for two years. The Saratoga High graduate is also on the Board of Directors at Flutters of Hope, a foundation that raises money and awareness about eating disorders. She is  a Shaker All Sport Booster Club board member.

Q: You were a standout swimmer at Saratoga High. How did you get involved in swimming, and do you ever want to get back in the water and compete?

A: When I was 7 years old, my older sister was on the Saratoga Stingrays. My parents knew how much I loved the water and thought it would be a great fit for me. I swam competitively for 13 years and loved every second of it. Even though there is masters swimming, being an athlete is in the past. I love being a coach and I was very fortunate to have an amazing high school coach, Josh Muldner — still the Saratoga coach today. I could always rely on him; he would push me in the water to hit the goals I wanted, and he created a family within our team. Those years with him and my team were the best years of my swimming career. If it weren’t for him, I would not be the coach I am today.

Q: Like most sports, there are nuances the general public doesn’t see or understand. What are some of the nuances a successful swimmer has to pay attention to?

A: No pool or swim meet is ever alike. You could go to the same pool a couple times a year and one minor change to the environment could change the way you swim. Changes in pool and air temperature can impact performance and the atmosphere around athletes at a meet can impact performance. Then again, swimming is like every other sport in that it has peaks, valleys and plateaus that the general public often struggles to understand. For instance, when athletes are doing some of their best training it doesn’t usually have an immediate payoff, especially in a short varsity season. It’s like chess, where a piece is sacrificed (in this case, the piece is equivalent to performance in a dual meet) for the check mate in the end (peak performance at sectionals.) And, in order to reach that “check mate,” athletes must eat right, rest when it’s needed, listen to their bodies, and most importantly, believe their training will offer a longer term reward.

Q: What would you like to see your athletes take away from their time on the Shaker swim teams other than the ability to swim fast?

A: Being a part of a high school team is special. It is not all about best times, winning a sectional title, or even going off to states. I want my kids to be able to look back at their years at Shaker and say they felt that they were a part of a family. That they enjoyed coming in every day seeing their friends, making memories on bus trips to meets, the pasta parties, sectionals, and just all the memories that come from being a part of a team.

Q: How did you get involved in Flutters of Hope and why is it near and dear to your heart?

A: When I started coaching for a local club team, I met and began coaching with Cheryl Marron, whom I soon to be friends with. Her daughter Annalise was diagnosed with an eating disorder at 11. I witnessed firsthand what Annalise, and her family went through, and the struggles they had throughout the years after her diagnosis. Annalise said if she were to ever survive her disease, she wanted to start an organization to help those like herself. From there, Flutters of Hope Inc. was created, and I jumped at the chance to be involved. Cheryl and Annalise have helped many people in New York state, providing grants for those who are struggling financially, and baskets that are filled with items that Annalise had in the hospital that helped keep her positive while being treated.

Q: If you could have lunch with any swimmer — alive or dead, active or retired — who would it be and what would you talk about?

A: Elizabeth Beisel, hands down. She is a three-time Olympian, musician, and volunteers so much of her time to causes that mean so much to her. I would ask her how and why she got involved in those organizations and ask her about the moment when she made the Olympic team for the first time and how she felt.