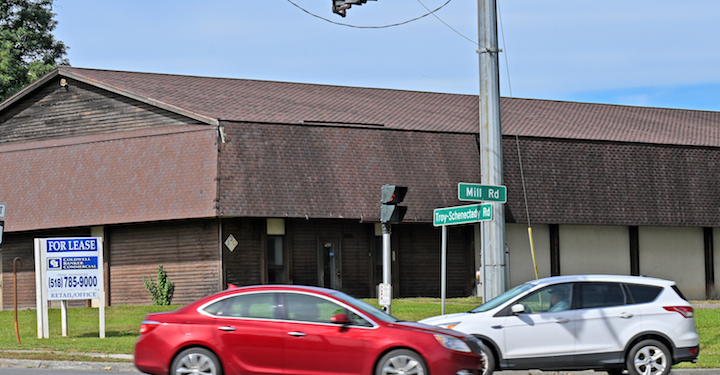 COLONIE — The Planning Board gave a cool reception to a new project on 6.2 acres of land at the intersection of Troy Schenectady and Mill roads.

The land is zoned Commercial Office Residential and under the current zoning 29 apartment units could be built, said Planning and Economic Development Department Director Sean Maguire. To bypass that, the developer is asking for a Planned Development District, or a PDD, which would allow for more density and require the developer to pay a substantial public benefit in the way of cash or in-kind services that would, as the name implies, benefit the public at large and not just this project.

There would be a new curb cut on Troy Schenectady Road which would allow only right in and right out access and the access road on Mill Road would be shifted.

“Your access is not good. You are talking 72 apartments and you are talking 100-plus vehicles. You start trying to get all those cars out in the morning and it is already very congested,” said Planning Board member Lou Mion. “We had a project before us before, Maserati, and that was a big complaint then, the amount of traffic generated, and by far I would rather see the Maserati dealership than this project because this will generate a heck of a lot more traffic.”

In 2017 DePaula Chevrolet had proposed a Maserati car dealership and repair shop at the site. The company built that dealership on Central Avenue, and a year later proposed a Mazda dealership at the intersection under discussion now. After several meetings that continued into 2019, it was withdrawn due, in part, to opposition from neighbors on Mill Road. Their main concerns included an increase in traffic and noise generated from the dealership.

The residential complex was presented as a sketch plan and the public was not allowed to speak at the Tuesday, Sept. 27 meeting. The Planning Board, though, sent enough of a message to the developer that it will likely have to come back for another sketch plan after revisions are made.

“You have way too much here, especially since you have not accounted for the 100-foot buffer and that is going to shift everything over,” said Planning Board member Craig Shamlian. “There are too many units, the buildings are too tall and you have very poor access. We want to try to work with someone on this corner, but you are trying to jam way too much on this site. And I am not convinced this site is appropriate for a PDD. It is just an avenue to try and jam more onto this site.”

Daniels acknowledged the current sketch plan as drawn did not account for a required 100-foot buffer between any construction and stream that runs through the site. As such, the entire layout will need to be re-worked.

He also acknowledged issues with access and said any proposed curb cuts or changes to Mill Road would need state Department of Transportation approvals. He also said he would confer with his client about the issues with density and the height of the buildings. DePaula

Under the current zoning, a 50-high building is allowed but that can be modified under a PDD.

“It’s a busy intersection already and we are adding more traffic to that so that is a concern,” said Planning Board member Michael Malone Jr. “More curb cuts on Route 7 is another tough one to get around. And with 72 apartments, I would like to see some play area for children if it not going to be senior living.”

Daniels said there is room for a playground where a dog park is currently penciled in.

There is a 23-foot setback proposed between the new construction and the property line to the nearest neighbor on Mill Road.

“It is overbuilt and overdone,” said Planning Board Chairman Steve Heider. “When we looked at another project like this we required a 50-foot or 100-foot buffer between the closest building and the houses on Mill Road and you are proposing a 23-foot buffer and a building that is four stories tall. We have not, historically, approved many four story buildings, especially in an area such as this.”