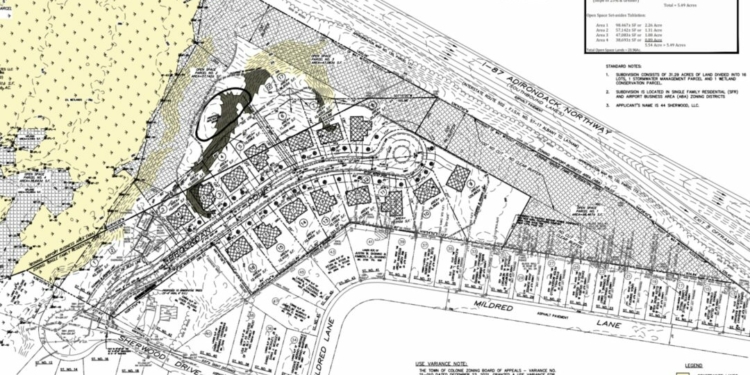 COLONIE — A plan to build 15 new homes off Sherwood Drive was forwarded by the Planning Board at its last meeting. There is already one home on the 31.3 acres owned by Dan O’Brien.

The project, presented by L. Sipperly & Associates, is proposed as a conservation overlay, which allows for smaller lots and increases the amount of open space. The 850-foot road and cul de sac, called Brookdan Court, and 19 acres of open space would be conveyed to the town. An additional 4.6 acres within the site would remain open space for a total of 75.7 percent of the total acreage that will remain open.

The project went through two sketch plan reviews and has been “substantively” revised since it was first proposed.

Under the plan that was forwarded by the Planning Board, there will be a 100-foot no-cut buffer along the Northway.

There is also a no-cut line along Mildred Lane, but Acting Planning Board Chairman Craig Shamlian said there might be a requirement to install some sort of landscaping or fencing between the new and existing properties. He said it is not uncommon for homeowners to clear cut to their property lines and “there needs to be some protections for Mildred Lane.”

The project must come back to the Planning Board for final site plan review.