Second phase of warehouse project given go ahead 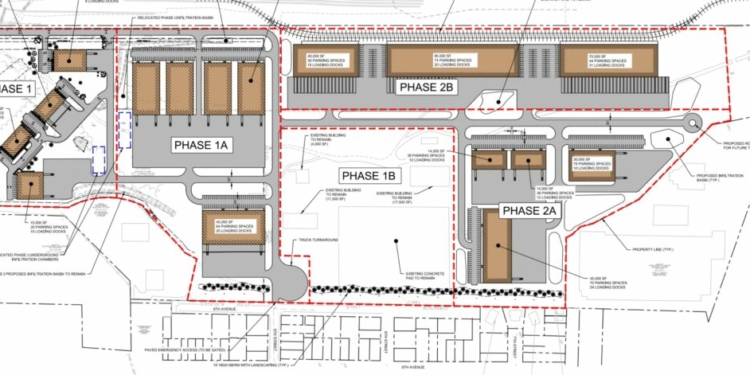 COLONIE — The Planning Board, by unanimous decision, gave final approval to the construction of five warehouses at the former 28-acre B&H Railroad site at the intersection of Lincoln Avenue and First Street on the Watervliet line.

Four residents spoke against the plan, saying the developer, Lincoln Avenue Development, LLC, a subsidiary of Luizzi Brothers, “doesn’t care about the back half of the property,” which borders their neighborhood.

The neighbors cited their never-ending battle with dust, an “astronomically upsetting” amount of noise and an increase in truck traffic as reasons for their opposition to the project.

“I am happy to see development come along. Happy the space has been rehabilitated.  But the construction has been very loud. It has woken me up many mornings and at least twice it has felt like an earthquake and my entire house was shaken,” said Junnie Huling, who lives on Eighth Street. “I am concerned with the additional truck traffic and additional development on this land. We have a neighborhood right next to it. It is so loud and noisy and busy my dog is afraid to go outside.”

Chuck Pfundi, head of real estate development for Luizzi Brothers, acknowledged that as a former railyard, it a dusty construction site, but said once construction is completed, the site will be blacktopped and landscaped and “a hell of a lot better than it is now.” He also said the truck turnaround loop along the Watervliet side of the site has been removed, alleviating one of Huling’s concerns.

“I appreciate everyone patience and I apologize if it has caused anyone any discomfort in their living situation,” he said.

The plan approved by the board on Tuesday, Sept. 13, is Phase 1A and would allow the construction of five more buildings totaling 159,000 square feet — one 55,000-square-foot warehouse and four 26,000-square-foot light industrial/commercial buildings.

There is also a Phase II and the Planning Board is considering the site plan in its entirety as it approves the individual phases. All told, there is a proposed 500,000-square-foot of new development at the site.

Also, at its last meeting, the board approved an Open Development District to allow access to the parcels in the back from First Street and Lincoln Avenue. The parcels are owned by the same entity but to secure financing are technically separate entities so an ODA is required for access, said Victor Caponera, an attorney representing the developer.

The residents, though, were upset with how the process was unfolding in their neighborhood and were skeptical of any more development.

“It’s quite a mess down there on Ninth Avenue. The First Avenue side looks nice but I don’t think they care about the Ninth Avenue side. There are residents down who have to look at it and the dust, you can wash your car one day and the next it is covered in dust,” said Paul Normand, who lives on Ninth Avenue. “There are kids in and out of there all day long. It is a residential area and we don’t need more traffic and more dust and more pollution down there.”

Construction of a 20-foot berm to buffer the neighborhood is one of the first items that will be addressed when earthwork begins at the site, Pfundi said.