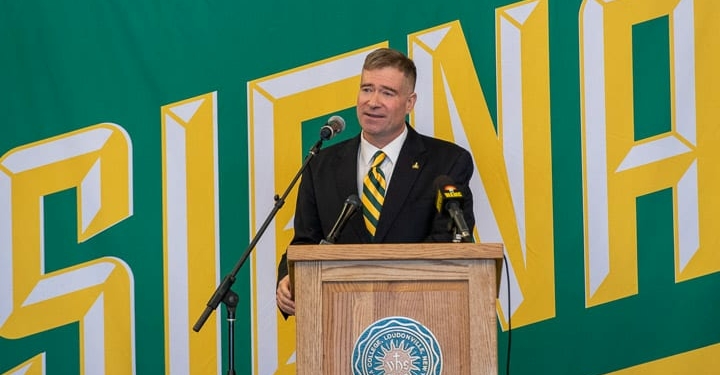 LOUDONVILLE — One the first day of classes, Siena College President Chris Gibson said he would retire at the end of the 2022-23 academic year.

Gibson, a decorated Army veteran and former congressman, was appointed to a five-year term in 2020. The 12th president of the college was the first to hold the position who was not a friar.

“While I’ve shared my intention to retire next summer after the completion of the academic year, there is still much to do between now and then,” Gibson said in a statement. “I am focused on leading Siena to provide a first-rate College experience, both in and beyond the classroom, and advancing and resourcing our strategic plan as we prepare our students to serve as leaders, inspired by Saint Francis of Assisi, to help make the world become more just, peaceful and humane.”

Gibson took over after the 11th president, Brother Ed Coughlin, died in July 2019 after complications following a non-emergency heart procedure. He was 71. A month earlier, he announced he was stepping down from the post. The 10th president, Rev. Kevin Mullen, resigned in 2014 to take a position leading the Franciscan Friars of the Holy Name Providence.

“The entire Siena College community is grateful for the leadership that Pres. Chris Gibson provides each day. Chris has masterfully led Siena during the pandemic and through the development of our new strategic plan,” said Board of Trustees Chairman Thomas Baldwin Jr. “The board looks forward to working with him until his last day to lead Siena forward, and we have prudently begun to put in place plans to ensure a smooth transition and continued effectiveness of our mission.”

After serving 29 years in the Army, rising to the rank of colonel, he was elected to the House of Representatives in District 19 where he served from 2011 to 2017. At the time of his appointment to Siena president, he was the Stanley Kaplan Distinguished Visiting Professor of American Foreign Policy at Williams College.

Stewart’s has the best milk in the state