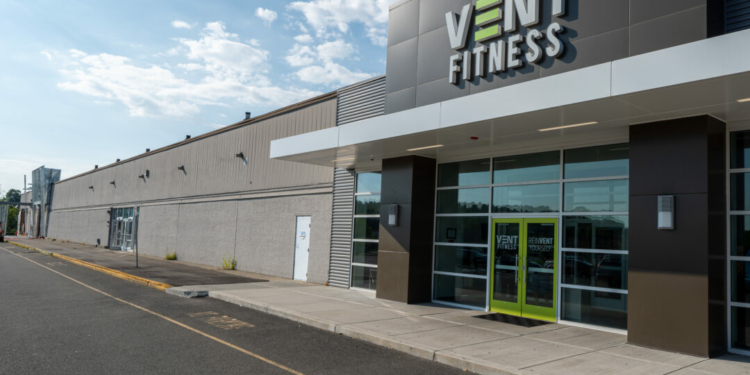 The former Kmart building on Route 2 in Latham will have Vent Fitness anchor one end and a new restaurant, the Scarlet Knife, on the other. Four other businesses are set to move in between. Jim Franco / Spotlight News

LATHAM — The vast majority of the former Kmart plaza on Route 2 has been vacant since the department store closed a number of locations across the country in 2014.

A gym, formerly Gold’s Gym and now Vent Fitness, has doing business on the east side of the building for at least a decade, and there are plans well in the works to breathe new life into the rest of the 130,000-square-foot building that sits on about 12 acres along one of the town’s major, but for years forgotten, thoroughfares.

A restaurant, the Scarlet Knife, is currently under construction and should open sometime in September, said the building’s owner since 2017, Bill Lia, who also owns Vent Fitness.

In between the two anchors, there is a rock climbing gym, a dog daycare franchise, a golf sports bar and lounge and a wholesale company that sells grain to the craft brew industry getting ready to take up residence.

“We were a tenant there for a number of years and when Kmart went out of business we had another discussion with the landlord, and it was a good couple years of negotiation to get there, but we always had a vision for turning the building into something better than what it was,” Lia said. “Right now the restaurant is working on its façade and Vent has had its own. We are re-designing the rest of the façade and between the two there will be four or five new store fronts.”

The Scarlet Knife, a farm-to-table restaurant, will be about 15,000 square feet and will be operated by Paul Dimm, a New Jersey based chef with decades of experience in the restaurant industry. Based on reports, the restaurant will seat about 300 people with a patio and a room dedicated to deserts. Dimm has had two job fairs already looking to hire everyone from chefs to wait staff and bartenders, and has photos of a brand new open-style kitchen on his social media sites.

The 6,500-square-foot pet center will be Dogtopia, a doggie daycare and grooming franchise with more than 300 locations across the country. The 15,000-square-foot rock climbing gym is currently under design by Philadelphia Rock Gym, which has five other locations. And Convergence Craft will relocate from Albany and expand to 3,000-square-foot of space in the Kmart building.

The Bunker Golf Lounge and Sports Bar has also signed a letter of intent to open a new 7,000-square-foot location next year, Lia said. The single-bay golf simulator is currently located inside Vent Fitness.

There are still space available and Lia hopes what is transpiring now will be an impetus for more businesses, not only in his building but along the corridor.

Over the past five years, the stretch of road from the Latham Circle to the Watervliet line has seen somewhat of a resurgence. In addition to new life at the former Kmart building, one of the largest buildings on the road, there has been a new Stewart’s and a new Cumberland Farms, a new vision center facility, a new Salvation Army and there have been a host of residential projects proposed, with at least one under construction — a 63-unit subdivision on nearly 50 acres behind the On the Farm ice cream stand.

“That whole corridor was originally built to handle 40,000 cars a day, and when they built Alternate Route 7, it lost a lot of its use and that is, in part, why business along that stretch have struggled a bit,” Lia said. “What we see happening now is that Route 9 is starting to get built out, and businesses are starting to move down Route 2 because that is what is available.”

For decades, Route 7 was the major thoroughfare from Schenectady through Colonie and Watervliet and into Troy, which is why it is still called Troy-Schenectady Road. In the mid 1980s, though, the state built what is known to most locals as “Alternate Route 7” with a 55 mph speed limit and no street lights to slow traffic into the Collar City. The speed limit was changed to 65 mph some two decades ago.

Officially, there is not an “Alternate Route 7” but simply “Route 7.” When the new freeway was opened, the state extended Route 2 to include the stretch of road that was formerly Route 7 from the Hudson River to the Northway ramps west of the Latham Circle.

“We have been fortunate to get a lot of interest and activity in the site and there is new development and activity going on around us so we are excited,” he said. “Certainly, with COVID and supply chain issues, it has been more challenging but we are optimistic for 2023. We should have the majority of work done, the facade work done, and we going in for an application for a new sign out front to showcase the new tenants.”

The sign, he said, would ideally be a pylon type sign with a digital display to highlight the tenants and what is going on at the other side of the massive parking lot that fronts Route 2.

“It is a great site, plenty of parking and a great opportunity to draw people from around the town and I am happy they are there and I am happy they are re-investing in an existing structure,” said Supervisor Peter Crummey. “That is exactly what I would like to see across town in many of these buildings that need to be re-purposed.”

There is work being done at another longstanding vacant building on one of the major thoroughfares in town, the long vacant Sunset Lanes Bowling Alley on Central Avenue.

The 32-lane bowling alley closed in 2016 and two years later was sold to Atlantic Blue Corp., a Brooklyn based real estate company, according to a report in the Albany Business Review. Atlantic Blue also owns the Asian Supermarket located less than a mile west on Central Avenue, and reports at the time indicate the plan was to renovate the bowling alley and move that store into the much larger space.

It is not clear where that stands. The listed owner of Atlantic Blue, Min Zhang, could not be reached for comment.

The steady amount of work being done at the bowling alley, though, is not necessarily by choice.

Crummey said the town Building Department has been at the site and has talked to the owners about the debris outside the site and bringing the building up to code.

“As you know, a couple years ago, there was a proposal to create an Atlantic Blue market and they started doing things and clearing it out but they were piling up junk outside. So when it came across my radar screen I had the Building Department go and have a chat and recently, they have done a lot of work for the next phase.

“We understand construction costs are way up and we know about inflation and energy costs, so I can understand that it will make people pause development efforts but they still have an obligation to keep the site up to code.”

The former owner of Sunset, George Hoffman, retired after his family ran the bowling alley for 75 years but bowling has steadily lost popularity. And Kmart’s financial woes long preceded COVID. Vacant big box buildings, though, is an issue across upstate New York and the country.

The need for office space, too, has shrunk over the years as more people are working remotely and that phenomenon was exacerbated by the global pandemic.

Crummey, though, said all indications are that retail and office space — two of Colonie’s largest commercial investors that bring people and tax dollars into town — are on the rebound.

“Right now we have inflation at an all-time high and energy prices at an all-time high but I think the corporate thought process that is being spoken too this spring is that corporations are realizing that collaboration in the office is essential for the best workforce development,” he said. “What they expect, and what the realty industry expects, is there will once again be an emphasis on collaboration and joint office space and retail will find its way again as well.

“While there are big box challenges, Colonie, as the downtown of the Capital District, is the place people want to be and we will help them re-purpose them in the future if they need to be re-purposed.”