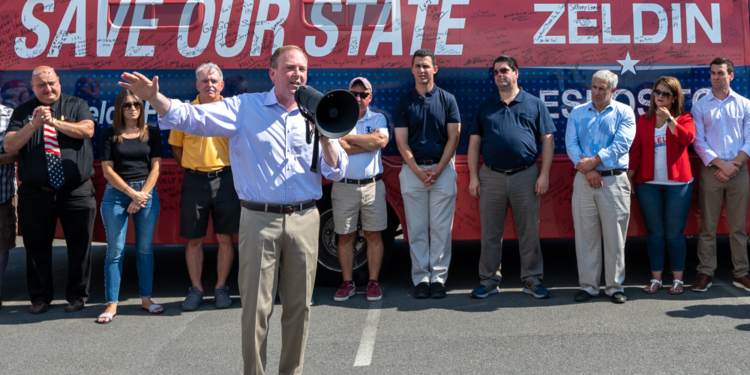 Lee Zeldin, the GOP candidate for governor, while standing in front of a red “Save the State” bus, hammered home the main themes of his campaign and criticized a recent poll claiming he was more than 20 points down with the election some two months out.

The Republican congressmen from Long Island said crime was a priority on the minds of New Yorkers and echoed calls to repeal reform to the bail system initiated by the Democrat-dominated state Legislature two years ago.

“I unapologetically back our men and women in law enforcement and I do it proudly,” he said, with a nod to his lieutenant governor candidate, retired New York City police officer Alison Esposito. “I believe rogue district attorneys who refuse to enforce the law and want to put handcuffs on law enforcement and refuse to put handcuffs on criminals should be forced to do their job.”

To keep the party faithful, faithful he addressed a recent poll by Survey USA, commissioned by WNYT in Albany, that found him 24 points down.

“It’s a fake poll. It’s not real. They didn’t verify registered voters or check voter history or any of that. There are those who study these things and say ‘this is a fake poll’ and there are others who echo it and declare ‘this is over,’” he said. “What we are tracking internally is this an 8-point race. That is not good enough because we are in this race to win. But, I’ll tell you what, when the polling said George Pataki, in the last week of the election, was going to lose by 11.5 and he won by 3.5, they were 15 points off and it’s only August.”

While that may be true, some polls had Pataki running neck and neck against the three-term incumbent Gov. Mario Cuomo as early as September. According to the Buffalo News, in an article published on Sept. 9, 1994, a poll by Mason-Dixon/Media Research had Pataki with 2-point lead. On Oct. 5, 1994, the New York Times cited a poll that found Pataki had a 3-point lead, 44-41, with 12 percent still undecided.

“Over the course of the next two months, they will tell us we don’t have a chance, some are in the media and you know Kathy Hochul and the Democrats will do it,” he said to about 200 supporters. “They are going to try and convince you this race is over.”

Hochul, a Democrat from Buffalo, was elevated to the position position after Gov. Andrew Cuomo resigned in disgrace. While an Aug. 2 Siena College Research Institute poll found Hochul with a 14-point lead, her favorability rating was under 50 percent. The same poll found 41 percent of the likely voters had no opinion or had not heard of Zeldin.

Zeldin is attempting to change that last stat by making state-wide tour with his “Save the State” bus and making a grassroots appeal to party loyalists.

“She said she was going after me for my views which means she was going after all of you,” Zeldin said. “If you believe like I do we should repeal cashless bail reform. If you believe like I do there isn’t enough upward economic mobility and opportunity in this state and it costs too much to survive here and we need to bring spending under control and cut taxes across the board. We are on a mission to save the state. We, our families, our neighbors and really our entire state is at a breaking point right now. Laws, safety, freedom the quality of our kids’ education are under attack and we will not stand for it.”