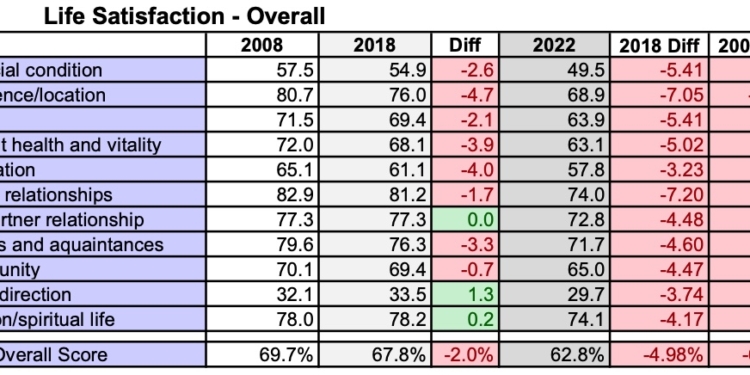 LOUDONVILLE — Just 27 percent of New Yorkers are more satisfied with their life today than they were a year ago. Thirty-three percent are less satisfied and 39 percent are as satisfied today as a year ago, according to a poll by the Siena College Research Institute.

SCRI last conducted the survey in 2018 and found 44 percent being more satisfied and 17 percent less so.

“In 2018 we noted a decline in New Yorkers life satisfaction from 2008 when we first asked these questions, but after Covid, political turmoil and now inflation, we see a significant drop among state residents in every category of life satisfaction,” said SCRI Director Don Levy. “It has been a trying time for many New Yorkers. When considering all residents we see the largest drops in satisfaction with family relationships, where they live, their finances, what they do for work and their health.”

The poll asked New Yorkers to gauge their satisfaction in 11 aspects of life (see chart.)

On the other end of the spectrum, just 49.5 percent are somewhat or completely satisfied with their financial condition (down from 54.9 percent in 2018 and 57.5 percent in 2008.) Forty-six percent say they are not very or not at all satisfied, up from 34 percent in 2018.

Three quarters of those polled say they are not very or not at all satisfied with the worlds as a whole — including political, economic, social and environmental issues and trends — and the direction everything out of their direct control is heading.

“While every area of life satisfaction is down across New Yorkers, the highest levels of satisfaction, those areas that give us comfort remain our relationships with others and our religious or spiritual life,” Levy said.

To compare satisfaction across the 11 areas over time and today between various groups SCRI computed scores based on whether a respondent said they were completely, somewhat, not very or not at all satisfied. A score of 100 means every person said they were completely satisfied and a score of zero would mean every person said that they were not at all satisfied. The ‘Total Overall Score’ is the average of the possible scores across all 11 areas.

Slightly more males were satisfied with their lives than women, 65 percent to 61 percent while those younger were less so.

“While overall satisfaction has fallen for both men and women in New York, today women are less satisfied with their lives than are men — a change from 2018. Since 2018, men’s satisfaction with recreational activities rose significantly and their satisfaction with friends and acquaintances rose slightly,” Levy said. “Among women no area measured increased satisfaction over the four years with the largest decline in family relationships perhaps due to Covid keeping people apart. Women also expressed less satisfaction than men with their financial condition, their work, their health, their relationship with a life partner and the direction of the world.”

According to the poll age also played a factor in satisfaction:,

The Siena poll was conducted from June 14 to June 27 by making random telephone calls to 401 New Yorkers. The overall results have an margin of error of +/- 3.7 percent.