CSSC gets a $2 million grant 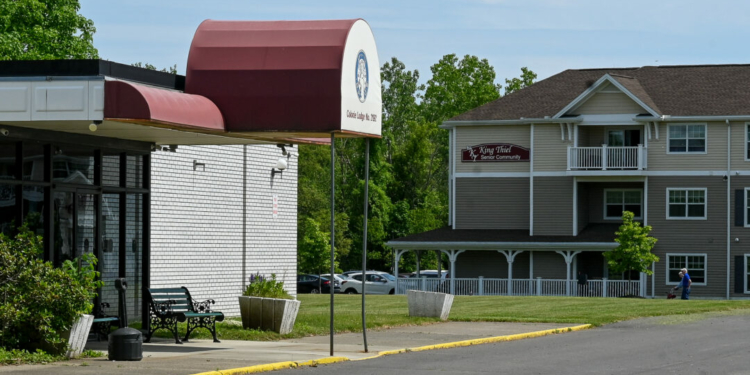 COLONIE — Efforts underway by the Colonie Senior Services Center to construct a fourth building got a $2 million boost thanks to New York state.

Assemblyman Phil Steck, D-Colonie, and Assembly Speaker Carl Heastie were expected to bring a $1 million check to Elks Lane — where the CSSC has demolished the former Elks Lodge to construct a 99-unit, three story building — but instead showed up with twice the amount.

The new building will be located next to the King Theil, a 96-unit building that opened in 2017.

“In the current real estate market, it is very difficult for seniors to downsize into affordable housing. Selling what you own often does not generate enough revenue to avoid stress in retirement,” Steck said in a statement. “Without this aid, it is likely the project could have been postponed for a long time due to increased construction costs. Now it is shovel ready.”

CSSC has two other facilities: The Beltrone Living Center on Winners Circle off Wolf Road with 250 units and Sheehy Manor on Cardondelet Drive with 50 units. Beltrone is geared towards “middle income” seniors and houses the CSSC administrative office and the town’s Senior Resources Department.

Rent prices at King Thiel are called “affordable” while at Sheehy Manor they are set for low income seniors. All 396 apartments in the CSSC system are rented, said Executive Director Diane Conroy-LaCivita previously, and there are hundreds on the waiting list and it could take years for a person to get a place.

The new 125,629-square-foot facility will carry the same price range as that offered at King Thiel, which is no more than 20 percent of a person’s income. It is restricted to those 55 and older and residents cannot make more than about $60,000.

“We are thrilled to have this level of commitment from New York state to allow us to continue our mission of helping seniors throughout our community,” Conroy-LaCivita said.

The Elks sold their longstanding building to CSSC and the membership merged with the Elks headquartered on Fourth Avenue in Watervliet.

CSSC introduced the plan in June. A handful of neighbors voiced concerns about traffic, adequate buffering and what they called a piecemeal approach to developing the site, which also now includes a cell tower that is not related to the CSSC project.

The Commercial Office Residential zoning was changed to a Planned Development District to allow more density and with that came a payment of $176,700 to the town. That number was determined by charging $1,860 per unit. CSSC paid the same when it constructed King Thiel on the adjoining site. But, it paid for 100 units at the existing building and only built 96 so $7,440 was subtracted from the new building total.