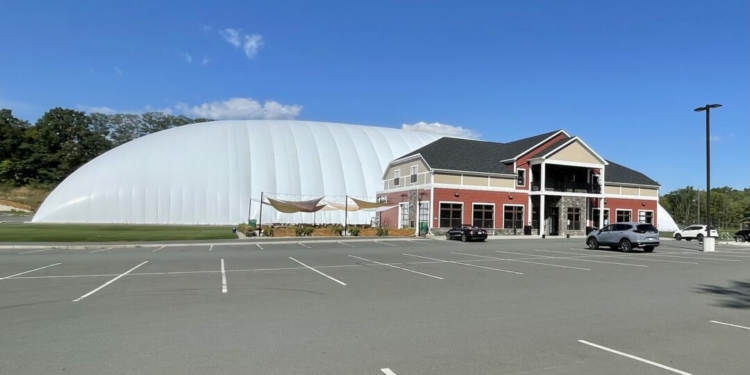 COLONIE — Christian Brothers Academy is proposing to build a dome to shield athletes from the often harsh and unpredictable upstate New York weather.

The 214-foot by 314-foot dome with a 4,000-square-foot entrance, would be built on a vacant chunk of land across Airline Drive from the fifth through 12th grade private school. It would not increase the number of athletic contests or host any additional events, said Craig Tripp, of Greenman-Peterson, Inc., who presented the plan to the board on behalf of CBA.

“The overall purpose of doing the dome is to provide an indoor practice facility for the students and the various athletic programs at the school already,” he said. “We are not introducing a new event venue or anything like that. We are offering a practice arena that is out of the elements, things that are already occurring on campus that may be at the mercy of weather.”

To put the size of the dome into perspective, he said it would be roughly three-quarters of the size of Afrims located a short distance away on Watervliet Shaker Road and the entrance is about two-thirds the size of the one at Afrims.

The dome will include a four-lane, 200-meter track with the infield providing room to practice football, lacrosse and baseball. It can also be modified to provide wrestling mats and a golf simulator.

There will be a perimeter road primarily to keep snow off the dome. It would also provide emergency access but Tripp said, if there is a fire, there is little fire fighting involved. Rather, he said, the common practice is to just let it collapse.

There is no additional parking proposed since the project will not bring any new additional activities to the campus.

There are waivers requested including the 64-foot height of the dome, which is about 25 feet higher than allowed in an Commercial Office Residential zone.

Planning Board member Kevin Bronner Jr. questioned whether or not the parking was sufficient if the venue should allow the school to host two different athletic events simultaneously, like track and football.

CBA President James Schlegel said the dome is not built to accommodate track meets but will instead give CBA students a chance to practice at a suitable venue other than running in the hallways.

“We are not building it to be a championship venue,” he said.

Planning Board member Lou Mion asked if domes come in colors other than the proposed white but Tripp said white is the most common color.

The project will need to come before the board at least twice more before construction can begin.