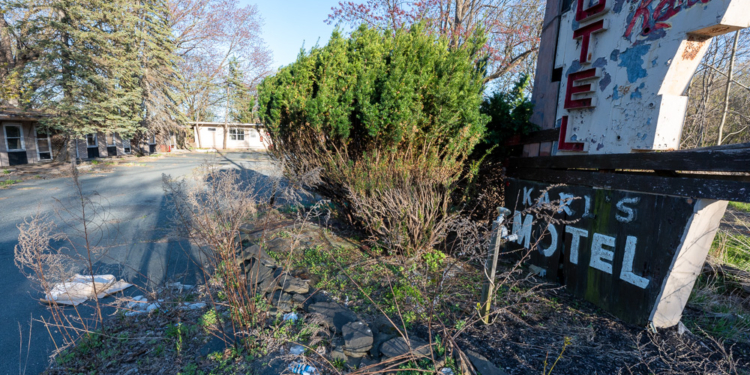 COLONIE — The Planning Board, again, voiced a number of concerns regarding a plan to raze the vacant and dilapidated Karl’s motel on Route 9.

“Space is an issue and both of these are commercial parcels, and I think it is a bad idea to incorporate residential on these parcels,” said Planning Board member Craig Shamlian. “They are not big enough to incorporate both uses. I don’t say this often but there is not much about this project I find appealing.”

The comment came the second time the developer, Fred Sharifipour, came before the board with his plan for two parcels, one is home to the motel and the second is two doors south and home to a vacant house.

Between the two is a 65-foot swath of land owned by another entity that provides access to some 20-acres to the east of Route 9 that will, presumably, be developed sometime in the future.

Despite the Planning Board objections to having residential along a commercial corridor, Michael Davis, of ABD, said the density is necessary to make the project economically viable. Sharifipour has already purchased the land, Davis said, and is looking at an expensive cleanup before construction can even begin.

All agree about anything is better than what is there now.

“1129 is .5 acres and contains a house that is vacant and basically the site is a dump,” Davis said. “1133 contained an old hotel that has been vacant for some time and is also a dump. There is debris all over the place. The buildings are falling down and everything needs to be cleaned up. It is a very expensive project and we need a certain number of units to make it a go.”

The initial plan was to construct a self-storage building to satisfy the commercial requirements under a Commercial Office Residential zoning regulations but that, at the behest of the Planning Board, was replaced with the office/retail component.

Other concerns remain including the fact there is no sanitary sewer and the capacity of a septic system on such a small site, the site density and parking requirements and the lack of amenities for the tenants, especially children living along a major thoroughfare.

The Planning Board didn’t dismiss the project entirely.

“I’m OK with residential there if there are amenities and if there is space to make it work,” said Planning Board member Kevin Bronner Jr. “If we can make it work, it is better than what is there now.”

It was the second time the project was before the Planning Board for a sketch plan review without advancing to the second phase of the review process. It will need to come back before the board at least three more times before construction can begin.