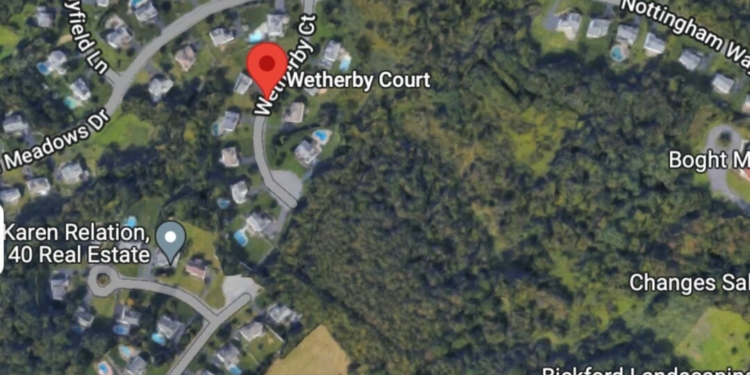 COLONIE — A straight-up proposal to subdivide nearly 14 acres of land off Route 9 is not as simple as it is on paper.

At issue is a Planning Board condition attached to approving a subdivision in 2020, Ridgeview Meadows, which includes Wetherby Court. To appease opposition to that project, the Planning Board said the town would to “the extent legally permissible” prevent opening the cul de sac at the end of Wetherby Court to  prevent future development.

If it remains closed, the acreage under consideration would essentially be landlocked, preventing any development from happening in the popular, upscale section of town.

“If I understand it right, when we approved what is being constructed now and allowed Wetherby to be extended, we did it with the understanding that it wasn’t going to go any further than that,” said Planning Board member Lou Mion. “So if we approve this, we are in violation of our own intent.”

Since that decision, there is a new Planning Board chairman and three new members on the seven-member panel as well as a new administration in Town Hall, including a new corporation counsel and a new counsel to the Planning Board.

Sean Maguire, head of the Planning and Economic Development Department, said the board would need “establish a new set of findings” to reverse any previous decision or intent, but it could be done.

Prior to the approval of Ridgeview Meadows, residents of the high-end Bergen Woods and Dutch Meadows came out in force to oppose the development and other development in the area. Concerns include increased traffic, exacerbating already bad drainage and a diminution of their property values.

The land under consideration is owned by Michael Reo and the homes in the latest subdivision would be constructed by Marini Builders. The land is within a Single Family Residential zone and the proposed homes are within those parameters. A new road would be dedicated to the town.

“This started in 1994 and there have been issues in that whole area, from Phase I to Phase II to various other projects along the line,” Mion said. “And access to Route 9 and access through Bergen Woods, through Wetherby. I think we need to put something together to show exactly what the history is before we can make a good decision to change anything we previously decided.”

Paul Goldman, an attorney for Marini Builders, said the bottom line is that the land is developable and the project is within the SFR zoning parameters. He said the condition of keeping Wetherby Court closed is not on the Ridgeway Court stamped plan, and as such is not enforceable.

“We believe the condition is just an intent and there is no force in effect,” he said. “Good planning always leads to future access points and that is all we are trying to accomplish tonight. The point is it is a developable piece of property and it is an approved use. Is it legally permissible. When you read it, it says to the extent ‘legally permissible’ and it is not. You are land locking a piece of property and the state abhors that.”

There are no other access points to the land given the homes already built — including those in Bergen Woods Estates, Ridgeview Meadows and Vandenburgh Estate parts I and II — that surround it and because of the existing topography and wetlands.

Maguire said it wasn’t the Planning Board that landlocked the property.

Planning Board member Kevin Bronner Jr. said rolling back a previous decision doesn’t look good for the Planning Board, especially since it was made to appease opposition by those living in the existing neighborhoods.

“On its face, it makes sense. It flows,” he said of the proposal. “But, we have to talk to the neighbors and visit the history and the intent. Rolling back previous decisions does not look good.”

Reo has owned the land for 15 years and was going to build a home there.

“I’ve paid taxes for 15 years. I had a lot of different intent. I wanted to live here but now I live in Halfmoon because things have gone awry and when you talk fair it has to address both sides,” he said. “This has been a big setback in my life. I am only one person, I am not 15 neighbors but it definitely set back what I was doing and how I was doing things.”

As the project progresses through the planning process, it is expected residents in the existing neighborhoods will again come out in opposition. There was already a letter sent to the Planning Board and one neighbor spoke about an increase in traffic and about his concerns with storm water runoff.

“There are a lot of homes being added to that street,” said the Bergen Drive resident, who made clear he was not speaking on behalf of the neighborhood and was not unilaterally opposed to the project provided his concerns were addressed. “We are happy with the project that is being built out next to us. We are not opposed to building but we want to make sure it is done right.”

Two board members recused themselves because of past business dealings with Marini Builders, Chairman Steve Heider and member Megan Baker.

Planning Board member Craig Shamlian, who was serving as temporary chairman for this project, said there needs to be a “comprehensive examination of what transpired.”

It was a sketch plan review, or a way to introduce the project to the Planning Board. It will need to come back at least twice more before construction can begin. In the meantime, there will be legal and other research being done on the history of the area to the west of Route 9 near Boght Road.