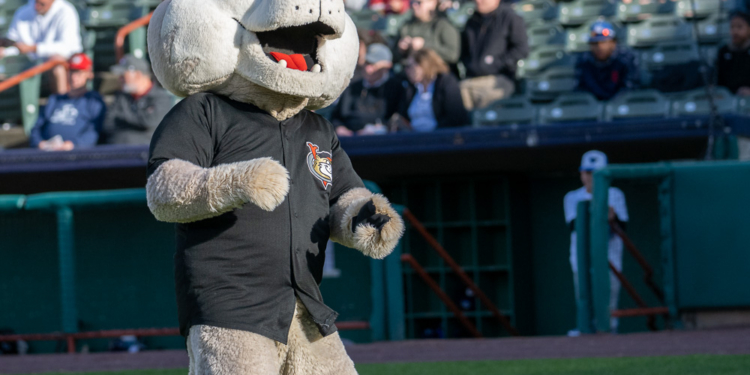 SouthPaw doing a little dance at a recent ValleyCats game at The Joe on the HVCC campus. (Jim Franco / Spotlight News)

During the day, his sixth grade students at Shaker Middle School in the North Colonie School District call him Mr. Springstead. By night, during baseball season, fans of the Tri-City ValleyCats call him SouthPaw. Michael Springstead has been the ValleyCats mascot for 20  years and he was also Homer the Diamond Dog when the Albany-Colonie Yankees played at Heritage Park, Wolfie for the Albany Attack, Kid Quest for the Albany Conquest, Lido for the Second incarnation of the Albany Patroons and Rowdy the River Rat, cheering on the Rats hockey team when they called what is now the MVP Arena home. Ed Springstead, the legendary Shaker track coach, is his father.  Springstead lives in Cohoes and when he’s not teaching students, entertaining fans, or jogging harness horses, he likes to follow the sports teams of his alma mater — the University of North Carolina Tar Heels.

Q: You bring a lot of energy to the Joseph L. Bruno Stadium when the Cats are playing, what do you do to get yourself pumped up before a game, mentally and physically.

A: The main thing I do is to make sure I’m properly hydrated and on really hot days I’ll take a hydration supplement. I’ve been doing it long enough so I kind of have it down to a science, as to when to start drinking water and how much I’ll need and as long as I’m well hydrated, everything else falls into place. Everyone thinks on the really hot days I’ll want an ice cold beverage, but it’s the exact opposite — lukewarm gets absorbed quicker, doesn’t bloat my stomach or cause cramps. I’ve had a full knee and hip replacement (same leg) within the past two years, and I’ve noticed I find myself stretching quite a bit more before and during a game  — while needing two ice bags after the game (shout out to Cats trainer Johan Mussa.) Mentally it’s really mind over matter. I’ve been friends with SouthPaw long enough to know the physical and time commitment it requires. Sometimes on really hot and sunny days and I’m relaxing by my pool knowing in half an hour I need to go put on a heavy fur suit. I just get up and go. I can’t control the weather, I deal with it. I’ve always had the attitude that I like the heat, so no big deal. I’m going to sweat quite a bit and on the rare cold nights, I’m the luckiest soul in the stadium. ValleyCats President Rick Murphy always jokes with me about always bringing my “A-game.” It’s pretty easy to get pumped up and excited on a sellout night or when the team is playing super, but I also need to bring the same level of excitement and enthusiasm and provide the same level of entertainment on say a rainy mid-week game when maybe the team is having an off night. It’s really like teaching —on a hot Friday afternoon, I need to provide my eighth period class with the same level of instruction as I did an earlier period. Nike really said it right with ‘Just Do It’ and that’s what I tell myself.

Q: You have been a mascot for a long time now, how did you get into it. And anyone who sees you at the ballpark can tell you are having fun, why is it still fun for you after all these years?

A: My school would always sing the National Anthem at a River Rats game. I thought it would be neat if I dressed as Rowdy and hung out in our section without the kids knowing. The Rats thought it was a rather unique request and asked if I had any experience. At the time I was helping Saratoga Catholic Charities as Santa (full disclosure despite the fact that I absolutely love Christmas, I made an absolutely horrible Santa) and it turned out the Rats needed a Santa to help out for a few games and being I had my own Santa suit I filled in. The very next game they needed a fill-in for Rowdy and the rest, as they say, is history. I didn’t miss a Rats home game for the next 15 years. I always played sports growing up — I never tried out for school plays or ever wanted to be a singer or act on stage. I just kind of had a knack for being Rowdy and other teams took notice and soon I was working with them. I just really enjoy what I do. The ValleyCats have always treated me very well — I know the front office, fans and players appreciate what I do and I take the role and the responsibility that comes with it very seriously. I always want to put on a great show. I enjoy seeing the fans smile, laugh and enjoying Southpaw’s antics. Knowing I was part of making the game experience enjoyable for them and creating fans for life is very satisfying. I think the best example of just how fun it is is when Southpaw is posing for a picture and I find myself smiling — a smile nobody can see. That’s a pretty cool feeling and I know I’m doing something right.

Q: Teaching sixth grade can’t be an easy job? In addition to reading, writing and arithmetic, what do you try to teach your students?

A: I always try to throw in some life lessons — be it something as little as saying ‘good morning’ or the importance of attention to detail. I like to impress upon them the concept of always putting forth your best effort and persevering (my father’s go to word for his runners.) I’ll talk about responsibility, and how responsibility is a great thing and they should embrace it. Our superintendent, Joe Corr, always says teaching is the noblest of professions, and I concur. I love being able to work with the students and hopefully have some positive influence not only with their academics, but also as they become young adults. I work in an excellent district, in a great building with some terrific co-workers and some pretty neat students. I’m truly blessed — Monday mornings are never an issue for me.

Q: Some of your antics are the polar opposite of a mild mannered sixth grade teacher Is there is Mr. Springstead and a SouthPaw or are the two personalities the same?

A: Well, mild manner might be a stretch. I know this sounds beyond corny, but it really is kind of magical when the suit goes on. Aches and pains tend to disappear and once the entertaining begins, I just kind of go into “Paw Mode.” I’ve always said in order for the character to be successful, you need to become him and some of you needs to be reflected in the character. I like to have fun, laugh, dance and fool around — coincidentally, so does Southpaw. People who know the secret sometimes come up to me and say things like ‘I can’t believe you danced on the field. Or ‘I can’t believe you sat on that guys lap.’ And I’ll always reply I didn’t, Southpaw did. In 20 years I don’t think we’ve had one player come through here who actually knew my real name. They’ve always referred to me as ‘Gato’ in or out of costume. Many of my friends call me ‘Paw.’ I hope it’s not for quite sometime, but I know it’s inevitable that one day Southpaw and I will walk down separate roads and I know it’ll be a sad day, a really sad day. Southpaw and everything he’s allowed me to do and the experiences I’ve had, have been a major part of my life for more than 20 years. It’ll be a huge void to fill.

Q: What are your two fondest memories of being the best known mascots in the Capital District and why?

A: Oh wow, that’s like asking a parent who their favorite child is. I’ve had so many great experiences, been involved in hundreds of exciting games, became lifelong friends with everyone from fans and front office workers to opposing coaches. I was able to have a private photo shoot with the Stanley Cup trophy in Rowdy’s dressing room and I have a picture with the head in the cup. That was pretty cool and something not many get to experience. In the early years of the Valleycats, Mr. Gladstone was always steadfast that when the Cats won a championship, I too would receive a championship ring. I actually teared up in 2010 when I was presented with my own championship ring. It really made me feel special, appreciated and that my hard work had paid off and in some small way I kind of made it as a mascot. Most mascots never receive a championship ring, and now I now have three and with the team we have this year and the way they’re playing, hopefully number four will arrive in the fall.