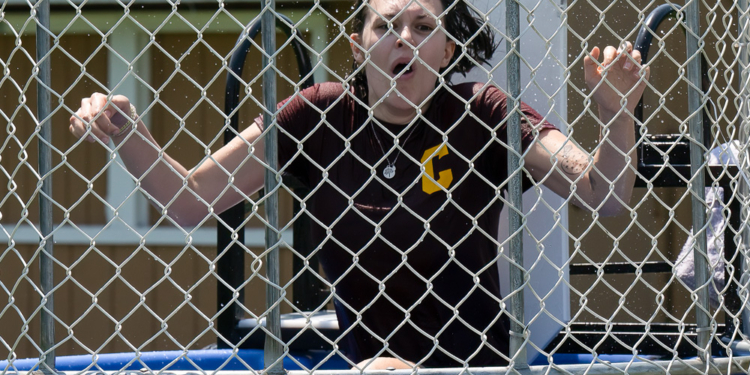 COLONIE — Where else can you dunk your physics teacher into a tub of water, have some good food and drink, check out some big public safety apparatus, play a bunch of games, peruse vendors, show off the latest from STEM students, listen to live music, climb a rock wall and at the same time bring the community together and raise money for a good cause.

Raiderfest, the signature event of the Colonie High club iCARE, which stands for integrity, community, accountability, respect and empathy, was back in full swing this year after being disrupted, along with the rest of the world, by COVID-19.

This year’s beneficiary of iCARE’s work is the American Foundation for Suicide Prevention. The cause was chosen after the class of 2022 lost one of their own to suicide. COVID-19 had a profound effect on the mental health of all of us, said Sandra Goldmeer, the area director of the Capital Region New York chapter of the AFSP, including teens.

“We are talking more about it, but we have to work harder to break down the stigma. We have to work harder to break the cycle and we need to treat it like our physical health,” she said. “It’s really important we listen when our teens when they tell us they are struggling and we don’t assume ‘it is just being teenagers. It’s been a tough time for everyone, and we have to structure how we deal at health overall differently. The brain is one of the most complex organs in our body, so mental health is part of our physical health and they can’t be divorced from each other.”

She said South Colonie first approached her in October, 2021 after student Hunter Hanley took his own life and she and AFSP put on a seminar for the student body. She was thrilled when iCARE picked her organization as this year’s beneficiary. In April, the iCARE hosted Chili Cook-off raised $1,700 for the cause.

She said the fact iCARE had Raiderfest, and picked suicide prevention as its focus will help students who may be having a difficult time of things.

“It’s easy to say ‘it was just prom’ or it was just ‘Raiderfest,’ but Raiderfest is something that brings our entire community together and they didn’t have it in 2020,” she said. “There are hundreds of students volunteering today ad there are graduates who come back every year and not having that opportunity can change mental health.”

May is Mental Health Awareness Month, which was coincidental if not appropriate. And in recognition of their work over the past two years, this year’s iCARE Kind Human of the Year Award was given to South Colonie school nurses during the opening ceremonies at the Hill of Heroes.

Raiderfest was cancelled in 2020 as the world went into lockdown to prevent the spread of COVID. A watered down version was held in 2021 and this year it was close to the what the event grew into since its inception. With the massive undertaking came a lot of hard work by the students who put it all together.

This year, the main concern was the scorching heat rather than a global pandemic, but two of the organizers of the event, iCARE members Treva Warzocha and Madelyn Terry, were still sweating out the details and hoping people would come.

“There are a lot more people than we expected and we are happy about it,” Terry said.

“We were worried about the heat keeping people away but it’s been beautiful so far and people are here enjoying themselves,” Warzocha said.

“We have a great crowd and we have money coming in today to support a great cause so we are excited,” Terry said.

Colonie High Principal Thomas Kachadurian, while praising the students’ hard work, said nobody was really sure how Raiderfest was going to go since through the months of planning and COVID continued to linger and the number of new cases is again on the rise.

Some traditional activities were put on hold, until hopefully next year, but all in all, while the events and activities were spread out more out of an abundance of caution, it was a full-fledged Raiderfest in the pre-COVID way of things.

“It was a fantastic culmination of a lot of hard work and sweat equity coming to I think social capital is the best way to measure it. Our students recognize the importance of community and they always also respect what our immediate needs are,” he said. “This year our efforts are to prepare our students for the hard conversations about suicide prevention and mental health and the significance of being there for one another. It was very important to just start, and as we continued throughout the year, we realized the activities brought us closer together through the difficulties of COVID.”

SPOTTED: Shaker girls off to a strong start in Class A postseason