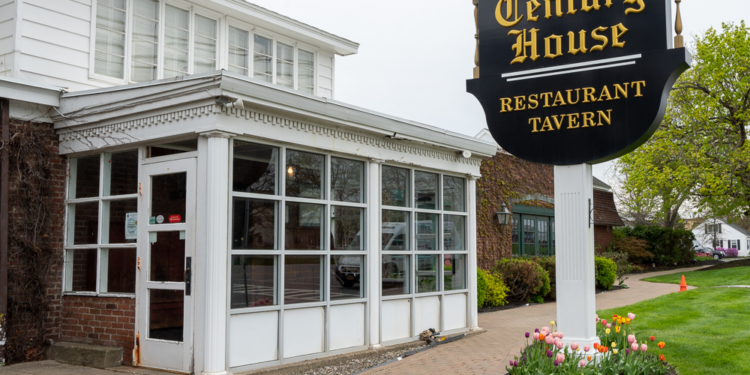 The Century House on Route 9 in Latham. (Jim Franco/Spotlight News)

LATHAM — A popular restaurant, banquet hall and hotel was sold recently for $6.5 million in a deal that would develop the land surrounding the Century House into an apartment complex.

The investment arm of Sunrise Management & Consulting, based in Latham, bought the 14 acres that includes the Century House complex at 997 Loudon Road from the O’Hearn family, with plans to build some 82 apartments in a “Federal-style, campus-like setting,” according to a report in the Albany Business Review.

The first phase would include two buildings with a courtyard and other amenities at a cost of $8 to $10 million, according to the newspaper. It would need to go through the Town of Colonie planning process before construction could begin.

The Century House restaurant, banquet hall and hotel, now in its 72nd year of business, will remain open, at least for the time being, and the hotel will remain.

“To Quote Mark Twain … the rumors of my death are greatly exaggerated,” read a note on the Century House Facebook page. “Please know that with today’s news of the proposed The Apartments at Century House, the Century House Restaurant/Event Center and Hotel will remain with the same management and the two businesses will continue to thrive while adding needed residential housing for the Century Hill area of Latham.”

Under rudimentary plans for the second phase, the restaurant and banquet hall would be demolished and replaced with 48 apartments and the original family home would be restored at an estimated cost of between $5 million to $7 million.

The 68-room hotel would remain and compliment the apartments.

“I believe that the hospitality industry and the apartment industry are kind of growing closer together, and the synergies between the hotel and apartment complex would be really cool,” Jesse Holland, the president of Sunrise Management told the Business Review.

For example, the apartment tenants could have access to hotel amenities like the pool, a conference room and fitness room.

The Century House complex grew from a Frederick brick estate house purchased by Jim and Dorothy O’Hearn in 1949. The family moved upstairs in the farmhouse and served guests in their own living and dining rooms, according to the company website.

It grew to include larger dining rooms, banquet facilities and ultimately a hotel and conference center with a pool and garden court.

Since June, 2009, the Century House developed its Enjoy One Share One Program whereby the company donates a meal through the Regional Food Bank of North Eastern New York for every meal served and every hotel room rented.