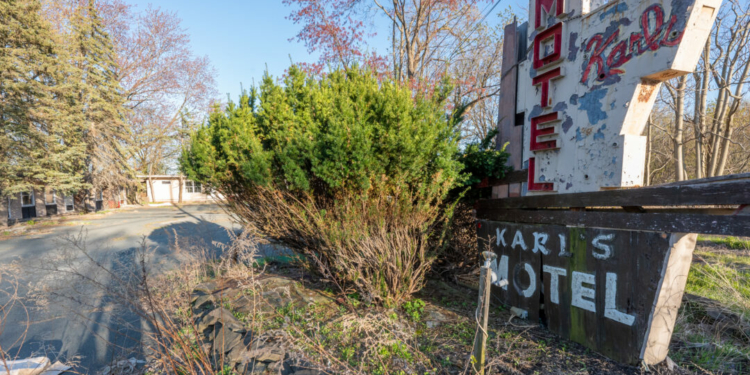 COLONIE — A proposal introduced at the last Planning Board meeting would demolish one of the town’s worst eyesores and replace it with new construction. While board members generally agreed that what is proposed is infinitely better than what is there, they were not sold on the project.

The plan, presented by Dave Kimber of ABD Engineers on behalf of the developer, Fred Sharifipour, building nine units of townhouse residential style housing and self-storage buildings on two lots, 1129 and 1133 Loudon Road.

It would first demolish the now vacant and dilapidated Karl’s Hotel and a residential home two doors south.

The motel was shuttered in 2020 when the town executed a search warrant and found numerous building and health code violations. One resident was living in such conditions to warrant an immediate removal and relocation. The rest of the “guests” were given two weeks to move and the town worked with the Red Cross to help find them suitable housing. The owner was also relocated.

Issues at the motel are longstanding and include a raid in 2008 which ended with six horses, two dogs and a cat — which were neglected and starving — and nine people being removed from the site.

There two main buildings currently have a large red “X” on them warning emergency crews they are not safe to enter should the buildings catch fire.

The board had a number of issues with the project, which is located in a Commercial Office Residential zone. According to town code, a development can be 100 percent commercial in a COR zone but not 100 percent residential. The project, as proposed, does not meet the percentages of residential in a COR zone but Kimber said the Zoning Board of Appeals has already granted a variance.

To satisfy the percentage of commercial still required under the code, Sharifipour is proposing the storage units, which, said Joe Grasso, the Town Designated Engineer for the site, could be interpreted as an amenity for the tenants rather than a true commercial endeavor.

Also, he said, the sketch plan does not include some of the amenities seen in the larger mixed use developments — such as playgrounds, parks and walking trails — that are often developed as communities.

“As you can see, we are going for an upscale style of building. They [the lots] are basically complete dumps right now. They have condemned buildings on them. There are two main buildings with a big red X on them and there are other accessory structures and everything is falling apart. It has been neglected for decades,” Kimber said. “It is a considerable expense to get this parcel cleaned up and turned into something that looks nice and made viable and that is what we are trying to do.”

There is a plot of land between the two but that is tentatively earmarked for a road to a future subdivision located behind the properties. Grasso recommended, should the project proceed, to tie access of the two parcels onto that road rather than have the tenants try and navigate onto the heavily travelled Route 9.

Other concerns include not having a sanitary sewer system on that stretch of Route 9 and the project instead calls for a septic system. And, should the tenants have children, a school bus would have to stop along Route 9 to pick them up, which is not desirable by anyone.

“What is there are probably the worst looking buildings in town right now. That said, I don’t think storage units and residential go together. I don’t think that was the intent and I don’t think it is the kind of mix that is going to be ideal long term,” said Planning Board member Craig Shamlian. “With all due respect, you can say we are going to rent to people without kids. But, at the end of the day … first of all, you can’t do that and secondly when push comes to shove and you need tenants you are going to take whoever walks in the door.”

Sharifipour, who has done a fair amount of business in Colonie, said he would not market to tenants with children and had previously explored a Dunkin’ Donuts at the site but the county Health Department didn’t approve because of the lack of a sewer system. Kimber said the need for residential is purely economic, which is exacerbated given the upfront cost to clean up the property.

“Having either of these sites as a strictly commercial development is certainly not going to be viable. Nobody would do it,” he said. “You guys want something that is mostly commercial, which is basically impossible.”

“I’ve been familiar with this property for the last 50 years and anything would be an improvement but it doesn’t mean we are going to lower the standards of what goes in there,” Planning Board Chairman Steven Heider said.