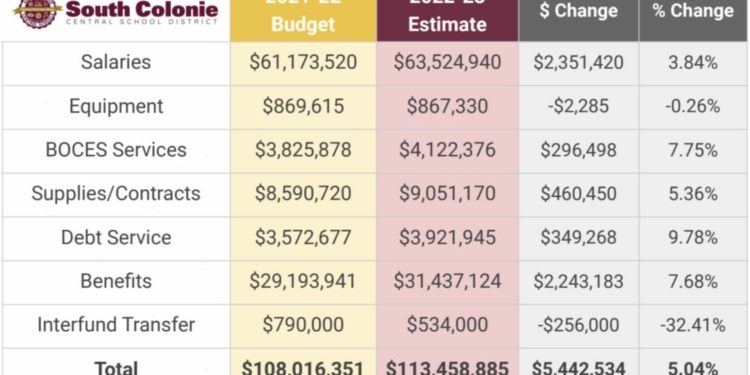 COLONIE — Taxes for residents living in the South Colonie Central School District would go up 2.49 percent, according to the $113.5 million, 2022-23 proposed budget.

It is below the state mandated tax cap of 2.93 percent.

The budget represents a 5.04 percent increase, or $5.4 million, over spending this year.

On the revenue side of the equation, the district is expected to raise an additional nearly $1.8 million through the tax increase and state aid is expected to increase by 15.2 percent, or nearly $4 million.

By far the largest expense for the district are the salaries for faculty and staff, which are expected to collectively increase by 3.8 percent, or $2.4 million, to $63.5 million. The district employs nearly 900 people and their salaries and benefits represent some 80 percent of the budget in any given year. Most of the increases this year are due to collective bargaining agreements, according to the presentation by the district to the Board of Education. Benefits will increase 7.7 percent, or $2.2 million to $31.4 million.

Financially, the district is in solid shape, thanks in no small part to the increase in state aid and a $9.3 million infusion of federal money over three years as part of the massive COVID-19 relief packages passed by Congress. Specifically, South Colonie Central School District was allocated $4.6 million from the American Rescue Plan Act and $4.7 million from the Coronavirus Response and Relief Supplemental Appropriations Act. There is no guarantee, though, the money will be extended past the 2023-34 school year.

“The good thing is not only do we have the federal money right now, we do we have anticipated increases in foundation aid this year and next year,” Superintendent David Perry said during a budget presentation. “What we can’t do is consistently continue to spend an additional $1.5 million every year. At the end of the first draft we had a $565,000 deficit, we have the money to balance it, but we can’t continue to add year after year because we will get to a point, in 2023-24, when the money will run out and in 2024-25 there will be layoffs or other overhead reductions. They are temporary funds designed to allow for additional supports now but not in the long term.”

The stimulus money is being used, in large part, to fund salaries that are considered temporary at this point in time.

Over the three years the district will hire, or has hired, a social and emotional learning coordinator, a number of teachers, counselors and support staff. All told, the district spent, or will spend, about $5.9 million on salaries and benefits for new hires. The plan is to look at sustaining the positions once the federal stimulus money runs out after the 2023-24 year.

“We have identified positions that are not permanent and those positions that are not in the general fund,” said  Jacqlene McAllister, assistant superintendent for management services and strategic planning. “We have identified those positions we want to move to the general fund as we move forward. In 2023-34 they not funded fully and 2024-25 is not funded absent any additional funding.”

Traditionally, state aid has been a guessing game since it is never finalized until the Legislature and governor agree upon the massive state budget but more recently, districts have gotten a better idea of what to expect two years out and Perry said he is confident the $3.8 million is a relatively solid number this year and is expecting at least the same next year.

“Unlike in years past there is more transparency in the legislative process,” Perry said,

In addition to the proposition asking voters for permission to spend up to $1.9 million to purchase what is now home to BOCES there is also a proposition to spend $1.2 million on 11 new vehicles.

According to the presentation, the district would spend

Financing would be bonded with the first payment due during the 2023-24 school year and 61 percent of it would be covered by state aid.

Voters across the state can vote on their respective school budgets on May 17.