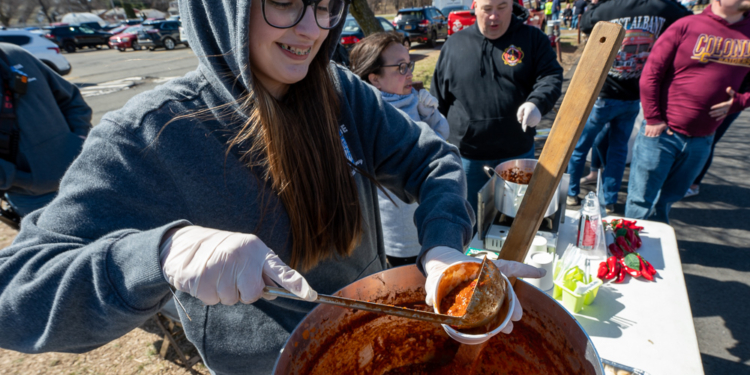 COLONIE — It’s never a bad thing when the biggest worry of the day is the prospect of running out of chili.

Such was the top concern on the minds of two Colonie High iCARE members who were charged with organizing the seventh annual Chili Cook-off on Saturday, April 2. This year, proceeds benefitted the American Foundation for Suicide Prevention — a cause that hit home for Colonie High students over the winter months.

“It’s going great. Maybe too good. We are almost out of chili and we have an hour and 30 minutes left,” said junior Ella Irons, a member of iCARE and one of the organizers.

“There are a lot of people here. A lot of familiar people and some not so familiar which is also good,” said junior Emily Terry, also a member of iCARE and an organizer of the event.

This year’s Chili Cook-off raised $1,720 for the cause. The judges choice for best chili went to the Colonie Board of Education and the People’s Choice Award, renamed the “Dan Burnetter Heart of Gold Award,” went to the Stanford Heights Fire Department.

iCARE stands for Integrity, Community, Accountability, Respect and Empathy. Each year, the club picks a cause and hosts a number of events to help support that cause. Last year it was to benefit the Northern Rivers and the family of injured Albany County Sheriff’s Department Sgt. Joseph Iachetta. This year it was closer to home.

“Not long ago our community was affected by suicide, in our school and the community as a whole, so this year we wanted to bring awareness and let people know they are not alone if they are ever in that situation. That there is help out there,” Terry said.

“We had the representative from suicide prevention come and talk to our school to emphasize the fact you are never alone and that there is always a helping hand, no matter how big or small the issue is, and to reach out for help if you ever need it,” Irons said. “It touched our hearts when this happened to us last year. You hear about it happening, but you never expect to experience it and when you do it brings it to another level.”

This is the third year Irons and Terry have been involved with iCARE and the first time they took the lead on organizing the logistics of the Chili Cook-off.

“Communication was difficult. Making sure everyone is coming at the same time on same place and making sure we have enough chili,” Terry said. “We are hoping it works out but it’s not a bad thing if we run out.”

The people’s choice award this year was renamed the “Dan Burnetter Heart of Gold Award” after the longtime member of the Stanford Heights Fire Department who “took great pride in his chili” and who was a “huge fan of ours,” Terry said.

“This Chili Cook-off is extra special. He was a huge fan of the cook-off and a number one supporter of iCARE and he meant a lot to the community,” Irons added.

“And he was a four time chili champion. Every bowl of chili has a little bit of Dan in it this year,” Terry said.

Markus Diedrich was stirring a pot of chili in Burnetter’s place this year — alongside with cook-off vets the Mike Kent and Dave Meservey — at the Stanford Heights table.

“This is something he looked forward to every year and I couldn’t think of anything better to do than try to fill some big shoes that probably can’t be filled,” he said.

iCARE was founded as an “initiative where both faculty and students could have a common forum to express and affect change for the better in the school community. But administrators say events like the Chili Cook-off are all up to the kids to organize and pull off.

“They are phenomenal. The kids plan everything and contact everyone and they do it all. I just sit around and talk about it. This is what iCARE does,” said an associate principal at the high school, Brian Scalzo, with a wave of his hand at the crowd outside the MUG. “iCARE is a place where every kid and any kid who goes here can belong. You don’t have to be an athlete but you can be an athlete or you can be an actor or in the band. It’s a home for everyone.”

The cause this year, suicide prevention, was chosen after the high school’s Class of ’22 was devastated by the suicide of one of their own, Hunter Hanley.

“It is a way for our school and our students to surround the family, and they have been very supportive, and recognizing what happened and getting the word out to help others,” said Superintendent David Perry. “We want to continue to eliminate the stigma and get the word out that there is help for anyone who is struggling. Our kids were impacted by his passing and his family and our students are continuing to support his memory.”

“It’s another fantastic event. The kids did a great job, we got some wonderful weather and some great chili. What more can you ask for.” Perry said. “It gives us a chance to interact with them in a different manner and it gives them a chance to build leadership skills and it is tremendously important, and beyond that people are having fun, which is the most important thing.”

Click on a photo below to view a slideshow of the rest of here is using a news app.

SPOTTED: Bethlehem girls lacrosse moves to 3-0 with 8-7 win over Shaker