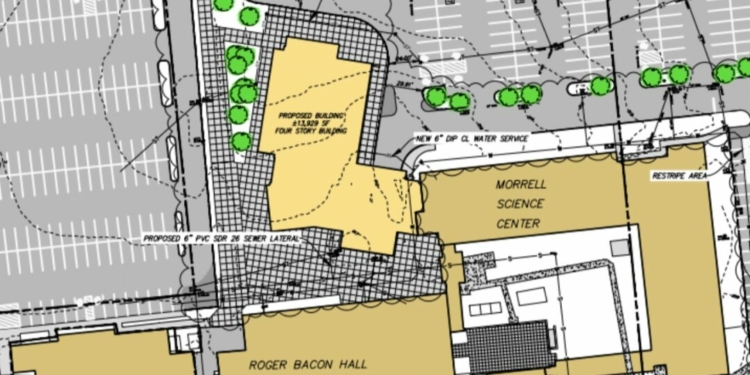 LOUDONVILLE — The new Noble Hall on the Siena College Campus was introduced to the Planning Board at its last meeting.

The hall, being built with a $35 million give from MTX co-founders Das and Nipa Nobel, the largest in college history, will be a three-story, 47,700-square-foot addition to the Morell Science Center.

“We think it is an attractive building and fits in well with what Siena wants to have,” said Dan Hershberg, of Hershberg and Hershberg, who presented the project on behalf of Siena College.

It would stand 62-foot high and would need a variance because it exceeds what is allowed under current zoning regulations. The adjacent buildings are 56 and 57 feet tall.

Planning Board member Megan Baker asked if the construction crews and materials would enter the site via Fiddler’s Lane and there was stipulation added that once construction starts related traffic would be restricted to the Route 9 access.

There are five new lecture style classrooms and 10 new laboratory type classrooms planned for the building that will include instruction in nursing, biology and chemistry and environmental science. There will be 12 new offices for, presumably, 12 new instructors.

The impact on enrollment is not known. If all goes as planned it will be open for the 2024 school year.

Das and Nipa Nobel immigrated to the U.S. from Bangladesh in their teens. Das graduated from Siena with a bachelor of science degree in computer science and the goal to found his own company. He serves as CEO of MTX and spearheaded the development of the Maverick Quantum Artificial Intelligence platform, which powers much of the company’s work with its partners in 35 states.