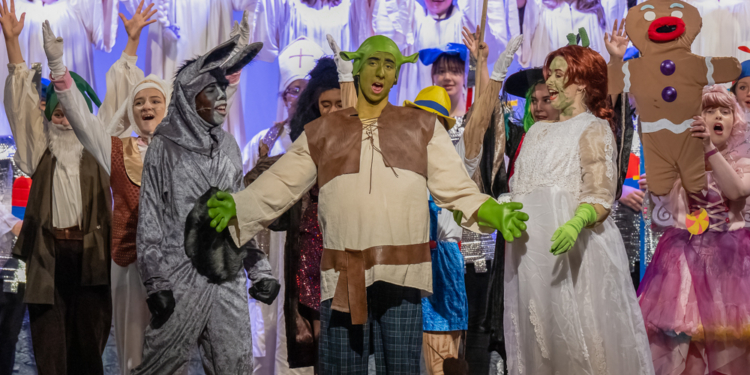 Shrek is a hulking, green ogre who has resigned himself to living a life of isolation in a swamp. It  is interrupted when a caravan of fairytale creatures shows up after being banished from the Kingdom of Duloc by Lord Farquaad. Shrek decides to travel with the fairytale creatures to Duloc to see if he can get his swamp back.

Along the way he rescues Donkey, who in return insists on tagging along to show the way to Duloc.

Meanwhile, Farquaad chooses Princess Fiona as his bride, but she is trapped in a castle guarded by a dragon. Thanks to a curse, by day she is a beautiful princess but by night she, too, is an ogre and is convinced a kiss by her rescuer, Prince Charming, will lift the curse.

Shrek strikes a deal with Farquaad to rescue the princess in return for a deed to his swamp and he and Donkey strike off to do just that. Along the way, Fiona and Shrek fall in love but a misunderstanding sends Shrek back to the swamp and Fiona off to marry Farquaad.

Donkey convinces Shrek to stop the wedding at the same time the Fairytale creatures decide to revolt against Farquaad.

During a scuffle, Fiona turns into an ogre in front of everyone and an upset Farquaad orders Shrek and the Fairytale creatures killed and Fiona back to banishment.

The dragon incinerates Farquaad and Shrek and Fiona admit their love for each other and share their first kiss. Rather than get turned into a beautiful princess, though, Fiona remains and ogre and they live happily ever after with the Donkey and the Fairytale creatures.

The Colonie production is just fantastic, complete with a complex choreography including a tap dance routine, an intricate set and, of course, a talented, dedicated cast and crew.

It is co-directed by James Haertel and Susan Vatalaro with technical direction by John Gehres. Musical direction is by Haertel and it is choreographed by Christine Meglino. Pit orchestra is conducted by Peter Cannistraci and costume design is by Karen Elk.

Shrek is played by John Malagrida, Fiona by Madelyn Terry Ford, Farquaad by Tyler Vazquez and Donkey by YaShab House.