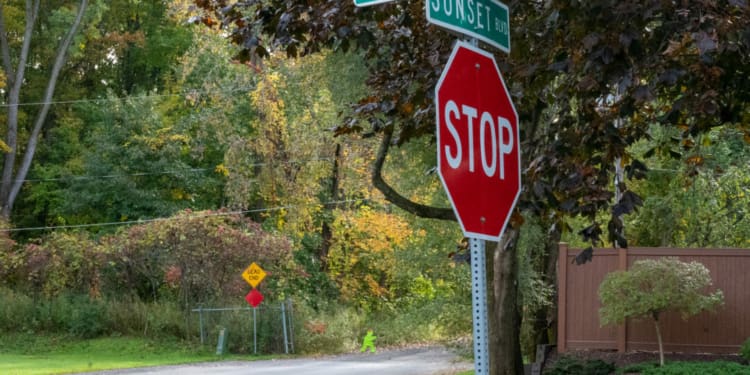 The dirt road at the end of Sunset Drive where Empire Sealcoating has been in operation since 2009. Jim Franco / Spotlight News

COLONIE — The Zoning Board of Appeals, without comment or discussion, put to rest a long standing issue on Sunset Boulevard by rescinding a stop work order and reinstating a certificate of occupancy that will allow a sealcoating company to stay in business.

But, there are conditions that seems to satisfy the business owners and the residents who brought the complaints.

The company, Empire Sealcoating, must conduct business in accordance with its initial, 2009 application to the town which includes storage of equipment and only having employees enter or leave the site in the morning and afternoon on certain days of the week rather than run a 24/7 operation. The scope of work and equipment is limited to asphalt sealcoating and stripping and not things like snow removal, landscaping, masonry and/or general property maintenance.

The longstanding battle between the neighbors and the company came to a head in 2019 when the town issued a stop work order and rescinded the certificate of occupancy issued to then Albany Firefighter Edward Persons. Person, tragically, while the business’s future was still in flux, drove to the site and committed suicide in 2020. His widow, Maran Person, continued to operate the business, albeit a scaled back operation, along with his former right hand man, Mike DePace.

“I’m very happy to have closure so we can move forward with things,” said Maran Person. “It is nice to close this chapter and continue with the business and make any changes we have to. I don’t want to fight with anyone. I am more than willing to work with the neighbors so we can all move forward in harmony.”

Kerry Bitner, a resident of Linda Drive, off Sunset Boulevard, said “it is exactly want the neighbors had asked for.”

“I first met with the town on this in April of 2019, and that is exactly what we requested from the town, to enforce the conditions of the permit Empire submitted to them,” he said. “The neighbors who live here have never asked for anything more.”

At the ZBA meeting on Wednesday, March 16, there were a number of firefighters and family members sitting on one side of the aisle while a handful of neighbors living along Sunset Boulevard on the other. Unlike the marathon sessions of the first three meetings, it was over in a matter of minutes.

A bit of history

In 2009, Ed Person bought 200 Sunset Blvd. from John Cerone, a homebuilder, to use for a sealcoating and asphalt striping business. A decade later, the town revoked the CO and issued the stop work order based on neighborhood complaints and because he expanded the business beyond what the permit allowed.

The residents, who live in the Village of Colonie, said the incessant truck traffic at all hours of the day and night presented a safety issue as well as diminished their quality of life. They showed thousands of photos, taken from the Empire Sealcoating driveway with a trail camera, of large and small trucks to prove their case.

There is only one way in and out of the business, which is located outside the village line down a 1,600-foot dirt driveway in the Town of Colonie, and that is through the Sunset Boulevard neighborhood to Sand Creek Road.

After the town shut the business down, the business appealed and were allowed to stay open, albeit in a limited capacity.

After more than nine hours of a trial like hearing — over three different meetings under the previous administration — the newly constituted ZBA ruled in a way that should appease the neighbors and allow the business to remain open under the previously agreed upon restrictions. The decision also allowed the business to remain open as closing it was not something the board wanted to do based on comments and questions made during the hearings.

The crux of the matter was what Person and Empire Sealcoating were allowed, or not allowed, to do.

The land where Empire is located is in a Single Family Residential zone, and as such there are restrictions on what can or not happen on the land. But, since the Cerone contracting business preceded the zoning restrictions it was allowed to continue doing business as a non-conforming use and Empire, when it purchased the property, inherited those rights.

But, there is a process that accompanies a change of tenant and during that process, Empire said it would be operating a sealcoating company and outlined the scope of and hours of operation, too which it must now conform.

The argument made by attorneys hired by Empire through the course of the hearing was that since Cerone used the site for all aspects of general contracting and home building that Empire was allowed to do the same under the inherited non-conforming use.

The question, though, was whether Empire could expand its businesses beyond what it outlined in 2009. A decade after opening, the company was doing excavation work, snow plowing and landscaping in addition to asphalt sealcoating and stripping.

“What struck me about this is it was a huge expansion from what they originally declared their business was which was sealcoating and striping,” former town attorney Michael Magguilli said during the third and final hearing in front of the ZBA. “And under new York state law you are not allowed to expand a non-conforming use at all. In our case, in 2007 when the zoning changed, what they were doing at that time was a legal non-conforming use at that time and expansion was illegal and they had to stop.”

Bitner said during one of the hearings he could hear the truck traffic while he sat in his backyard at night.

“The same vehicles are making 20-40 trips a day. I have pictures. I have almost 8,000 photos,” he told the ZBA. “They use the property on weekends, holidays, Thanksgiving and Christmas. It doesn’t matter.”

During a hearing on Sept. 29, 2021, DePace, who took charge of the day-to-day operations after Ed Person died, took the stand and explained what the company had been doing since it opened in 2009 and admitted the scope of operations did expand. But, he denied the neighbors claims of a steady stream of trucks going in and out of the site. When it snows, he said, trucks may come and go at night to plow and also when there is a commercial sealing or asphalt job but the traffic wasn’t a steady thing.

“We may have 13 vehicles in and out combined on any given day so that would be six in and seven out,” he said. “They don’t go out all day long. It’s random hours. It could be any hour of the day. It could be two or three vehicle and it could be four or five hours without any vehicle or it could be a vehicle an hour.”

Robert Cordell, who in his capacity as the town’s chief commercial building inspector, granted Person a Certificate of Occupancy in 2009. Under questioning by Empire’s attorney, Greg Teresi, he told the ZBA he was working for a mason in the 1960s who subcontracted for Cerone and he visited the site often. He knew what Cerone did back then, and knew what he did for decades following. Person intended to use it in the same manner as Cerone had for a half a century and that, he said, justified continuing the non-conforming use.

“This business has tripled since 2009. Bob Cordell was covering his butt and should not have given them a variance,” said Mike Fusco, an Aldershoot Road resident who gave the ZBA a petition with the 120 signatures asking the town to do something about the business. “We feel like it is too big. We don’t like the trucks and we don’t like the dirt all over our houses. Our neighborhood is beautiful. It is for the good of one or for the good of many.”

The hearings began on July 28, 2021, with the current head of the town Building Department Wayne Spenziero, who revoked the CO in 2019 and issued the stop work order. He said he based his decision on the direction of the town attorney’s office and on photos provided by the neighbors that showed large trucks coming and going at all hours of the day and night.

“As time went on we got complaints from the neighbors,” he said. “They were complaining about the business and the traffic going in and out excessively. It was more than just a sealcoating business. He had other businesses going on. It wasn’t just during the day, it was constantly throughout the night.”

Maran Person said she would consult with the attorneys to determine what the business will do going forward.

The arts for Ukraine