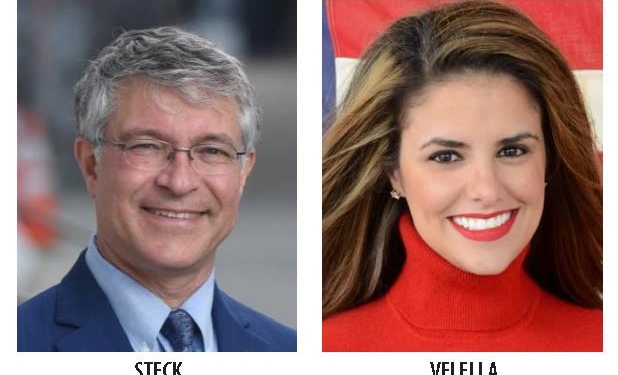 Republican Alexandra Velella is collecting signatures to take on Democrat Assemblyman Phil Steck for the right to represent the 110th District in November.

Velella is making her second run for public office, having narrowly lost a bid for the Colonie Town Board last year. On Election Day she was in second place for three open seats on the board but after absentee ballots were counted she came in fourth by 87 votes with more than 10,500 cast.

Velella, the daughter of the late Guy Velella, who represented the Bronx in the Assembly from 1973 to 1982 and in the Senate from 1986 to 2004, said Steck was “incredibly out of touch with the people he represents.”

“He is not representative of this district,” she said. “His policies have essentially been toothless or geared towards higher taxation and taking money out of people’s pockets and putting them in government coiffeurs and we are at a point now economically where that can’t happen anymore. It will destroy this area.”

After a hard fought Democratic Party primary in 2012 to replace the retiring Assemblyman Bob Reilly, Steck won his first general election to the Assembly seat by beating Republican Jennifer Whalen by a 15-point margin. His second in 2014 was closer, but he still beat Tom Jasiewicz by an 8-point margin. He won his next three elections by margins of 20 points-plus.

“Apparently, Ms. Vellela is unfamiliar with my record and seeking to conjure up issues to score political points,” Steck said.

Velella said She has the support of the Republican and Conservative parties in Albany and Schenectady counties while Steck will likely have the Democratic and Working Families Party support. Velella said Assembly Minority Leader Will Barclay has scheduled a fundraiser for her later this month. Steck is a solid member of the majority where Democrats outnumber Republicans by more than a two-to-one margin.

With the state’s accelerated election calendar, the primary is in June and designating petitions are due by April 19.

Velella said public safety is a major safety and in particular the so called bail reform passed by the state Legislature in 2019. Public safety is on the minds of many — a recent Siena College Research Institute poll found more than 90 percent of New Yorkers think crime is very or somewhat serious concern and 65 percent think the law should be reformed to give judges more discretion.

“Law and order and public safety and improving our communities so our children are safe, all of that is on the line across New York state,” she said. “Bail reform is causing tremendous problems and tremendous increases in crime and that has to be changed. The opioid crisis is raging and these are things Phil has presided over. Someone needs to step up and challenge these people who have been in office for so long and represent the community.”

“I voted against the original bail reform law and was a leader in the effort to correct the law by adding more crimes for which bail could be set and for additional provisions that bail could be set if defendants committed crimes while released,” Steck countered. “Without this work on my part, the bail law would not have been corrected.”

Other issues, Velella said, include allowing parents more of a say in education curriculums and to push for a continuation of allowing restaurants to sell alcohol to go.

“Our education system is in chaos. People want to be engaged and they want to know what is going on and I truly believe parents have that right and they want to have a say in what their children are being taught and what they are doing all day in school,” she said. “People get food to go and they want drinks with it so what is the difference between going out and buying an alcoholic beverage from Stewart’s or a liquor store? And it’s not about buying alcohol, it’s about helping the business owners recover from a horrible two years. The businesses who managed, somehow by the grace of God, to remain open and kept people working deserve our help.”

“Unlike my opponent, I do not believe the Legislature should be interfering in the educational curriculum. That is why we have a Board of Regents and elected school boards — to keep politics out of education. Neither the Board of Regents nor any school board in the 110th Assembly District has required the teaching of ‘critical race theory’ in the schools,” Steck said. “Also, again, I voted in favor of allowing restaurants to sell alcohol to go to help them recover financially from COVID. My opposition is to the governor’s plan to make this permanent. I do not believe we should seek to run an economy based on the endless proliferation of alcohol and marihuana. I support regulation of those substances.”

Both Steck and Velella are attorneys.

Steck graduated from Harvard in 1981 and then the University of Pennsylvania Law School in 1984. From 1987 to 1989, he served as an assistant district attorney in New York and Rensselaer counties before joining a private law firm. He is currently chair of the Assembly Alcoholism and Drug Abuse Committee and a member of the Health, Insurance, Judiciary, Labor and Oversight/Investigations committees.

The 34-year-old Velella grew up in Albany and moved downstate to attend Manhattan College and Brooklyn Law School. She was working in a New York City law firm, but returned to the Capital District in March, 2020, as the pandemic began ravaging New York City. She currently specializes on workers compensation cases.

“It’s Inspiring to see the younger people hold office and the vibrancy and energy they bring to government, on the left and the right, and I want to be  part of that,” she said. “People want to see real change and it’s not a left and right issue, it is a sense that government is supposed to be for the people by the people and not one guy who gets in and has the money and the power and he stays there until he wants to leave.”

Election Day this year is on Nov. 8 and early voting runs from Oct. 29 through Nov. 6.

SPOTTED: The HV Gamer Con at the Albany Capital Center