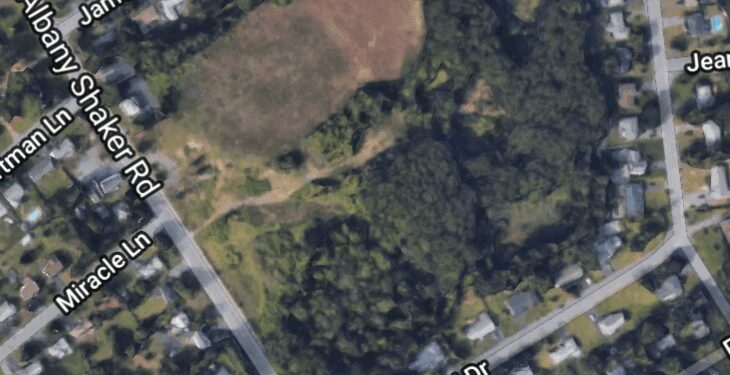 COLONIE — The Planning Board, by unanimous vote, gave final approval to a 40-home conservation subdivision on 499-507 Albany Shaker Road that used to be home to Foegtli Farm.

The project gained concept acceptance, the second phase of the planning process, in 2019. It is a scaled back proposal than the initial plan that included 80 new homes in a Planned Development District that allows more density than current zoning allows. The conservation subdivision does allow for more density than a traditional subdivision but not as much as a PDD would allow.

The project is planned for across Albany Shaker from Miracle Lane and Shaker El, where the Shaker Road Elementary School is located.

One resident spoke during the public hearing on Tuesday, Feb. 14. Steve Orenstein, who lives on James Drive, a residential neighborhood northwest of the proposed site, asked about a traffic study on the already busy thoroughfare of Albany Shaker Road, and who is responsible for enforcing the 25-foot no-cut buffer between the existing homes and the new development.

“With the school traffic and church on Sunday, the traffic is already crazy,” he said.

The site is expected to generate 33 new vehicular trips during the a.m. peak hours and 42 during the evening rush hours. The state Department of Transportation only requires mitigation, like a traffic light, if there are more than 100 new trips generated

Dan Hershberg, an engineer who presented the plan on behalf of the developer, Starlight Development Corp.,  of Duanesburg, said the traffic study led to the inclusion of a right in and right out access to the development and that enforcement of the no-cut buffer would fall on the town. There will be a neighborhood association, he said, but it likely would not have the teeth to enforce regulations.

Sean Maguire, head of the town Planning and Economic Development Department, said as with any buffer area or conservation or wetland area in town, if someone sees something they should report it to the department and it will investigate and take the appropriate measures.

The existing farm stand and other buildings on the nearly 21-acre site would be demolished.