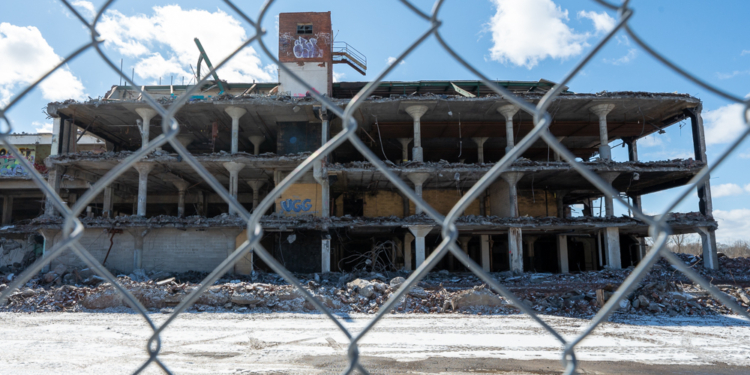 COLONIE —Exchange Street along the former Tobin’s Frist Prize plant is back open as crews continue to methodically reduce one of the Capital District’s largest and most visible eye-sores to rubble.

While it may seem like it is taking a long time, considering the size of the machines and the age of the building, Josh Frederick, the director of field operations for Jackson Demolition, said everything is going according to plan.

Actually, he said, despite the size and the storied history of the building, it’s a pretty straight forward job for the Schenectady-based company that demolishes large commercial buildings across the country. It is currently knocking down power plants in Virginia, Florida and Alabama and an old paper mill Florida.

“It’s an old, ugly building and while there is a lot of interest in it, and it is a pretty cool job,  there’s not much to it (the demolition,)” Frederick said of Tobin’s. “Basically, we did asbestos abatement and then started knocking down concrete. There is a lot of concrete.”

The back half, or the section of the building furthest from Everett Road, was home to offices and storage and it was knocked down first. The more high profile work of the machines ripping and tearing and knocking chunks of the building to the ground only took a few weeks and then there was a lull of a few weeks where there didn’t appear to be much activity. But, Frederick said, crews were getting the footings and foundations out of the ground and pulling massive chunks of concrete up is considerably more difficult than knocking them down.

“The demolition, or razing of the building, usually goes pretty quickly but the foundation removals take a while,” he said. “And all that material has to get handled at least one more time and in many cases two more times before the job is considered complete.”

Once the back section was down, they turned the focus on the front half, the three-story section of building nearest Everett Road where the actual meat packing took place and has been described as “one a huge freezer.”

The operators in the large machines don’t haphazardly knock walls down. They are methodical, and for the section of building along Exchange Street, they would cut the building into sections with a large scissor-like attachment on the end of one of the track hoes. It would latch on to a chunk of reinforced concrete floor and cut along it for several feet. Then it would flip the scissors and cut the post under the section of floor and then cut some more of the floor  until gravity eventually won out. It didn’t hurt to have a traditional backhoe standing by to help the law of nature out a little when needed.

“They are the best,” Frederick said of the union operators on site.

Part of the plan is to take the massive chunks of concrete and grind them up into sizes that can be used for fill for when the site is re-developed. First, though, the considerable amounts of re-bar — steel rods of varying diameters that are included in many structural concrete pours to make it stronger — and other metals have to be sorted out and recycled.

One of the crusher machines Jackson has does it automatically, but the material still has to be picked up and fed into the machines. Frederick said. He figures it will be until June before all the material is sorted and either hauled away or crushed and piled up on site.

“The building will be on the ground long before that but it will take some time to clean everything up,” he said.

There was some talk about using explosives to level the building but Frederick said that method is only used in about 1 percent of all demolition projects. Given Tobin’s three-story height, the machines on site can reach to the top so it fell into the 99 percent of jobs that rely on machines and gravity.

The iconic, or infamous, smokestack, though, is another story. Frederick said last week he is still not sure how the company will go about knocking it down but it will be the last thing to come down.

However it is decided, it will be a spectacle. There is a steady stream of onlookers who have stopped to see the building that once was such a huge part of the West Albany Neighborhood coming down and there is a live stream set up so people can watch at home.

The building was such an integral part of the neighborhood for so long that while people are glad to see it go, there is a sense of nostalgia, too, for so many families who made a living from the Tobin’s meat packing plant.

It its heyday, which ran for decades since it opened in 1924 years, Tobin’s First Prize employed more than 1,600 people at the some 500,000-square-foot building. But, the massive building has sat largely vacant and dilapidating since First Prize closed the doors in 1981.

A number of ideas were bounced around to redevelop the site including at least two hotels, a casino, a Walmart and at least two sporting goods stores. All fell by the wayside for one reason or another, not in the least being the cost to demolish the existing structure, which one report pinned at $1.5 million. This time, though, Richbell Capital, a Saratoga-based company, is following through with a plans it first floated six years ago.

Like everything over the past two years, COVID-19 has changed the plans for the 32-acre site once the building is gone, but at the core it will still include housing and retail and and potentially some hospitality and entertainment, said Richbell President Bill Hoblock.

Since the site crosses the municipal boundary, construction plans will need the approval of a joint Planning Board between the City of Albany and the Town of Colonie. So far, there has not been a formal proposal introduced to the constituted board but Hoblock hopes to have a site plan review process completed by the end of 2022.

“We have asked that the Consolidated Planning Board be convened so that we can begin the final site plan review process,” Hoblock said. “It is important that the site plan review process be completed this year so that we are able to start construction of the redevelopment next year. The clock is ticking and we want to keep the progress moving forward. While we have made tremendous progress, there is still a long way to go to redevelop the site, bring activity to the long dormant and decaying property and, importantly, generate significant tax revenue for the Town of Colonie and City of Albany.”