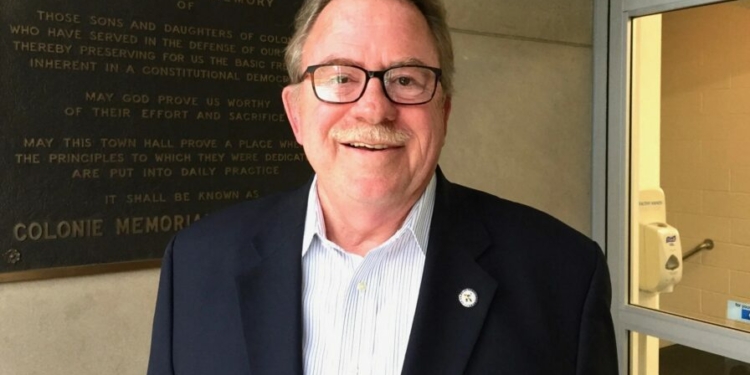 COLONIE — The Town board, by unanimous vote, named Steve Heider the next Planning Board chairman.

The former 40-year-plus police officer who served as chief for 12, has been on the Planning Board since 2017 when he was appointed to replace Tim Lane. He will take over for Peter Stuto, who resigned prior to the expiration of his term after serving as chair since 2011.

The Planning Board may not have the notoriety of the elected Town Board members but the questions before it are as difficult and its decisions impact the everyday lives of everyday citizens and residents.

“The decisions we make effect the town not just for a week or two but for a long time if not forever. It is important to try and get it right,” Heider said. “You try to and hit the middle ground because not everyone wants things to happen and on the other side people want a lot to happen so you have to land somewhere in the middle.”

That middle ground is often found somewhere between the wants, desires and legal rights of developers and land owners and those of existing neighborhoods and residents. Often the Planning Board is called on to moderate concessions within the parameters of the town zoning and land use laws.

“I learned a lot from peter, he could run a good meeting. He let everyone talk and he listened to everyone and he didn’t always agree with everyone but at the end of the day I say he did a damn good job of being making sure everyone had a say in the process,” Heider said. “He tried to hit the middle ground, and realized not everyone was going to be happy, but he made sure everyone was involved.

“This is not unlike what I have done throughout my career. You listen to both sides and try bring people together for the good of everyone.”

To fill the remainder of the term being vacated by Stuto, the Town Board appointed Michael Malone Jr. until the end of 2022.

The Town Board also appointed Kevin Bronner Jr. to a three-year term to replace Susan Milstein, who’s term expired at the end of 2021.

Heider said he does not personally know the two new board members but is looking forward to working with them.

“I think it is fantastic he (Supervisor Peter Crummey) picked some young people to be on the board,” he said. “I think it is important to see young people involved in the process. It is a pretty important board as far as town goes and they represent a constituency that makes up a good part of the town.”

Prior to his appointment to the town Planning Board, Heider was on the Village of Colonie Planning Board. He is on the Albany International Airport Authority and the Colonie Youth Center boards of directors and owns a small business in town.

The Town of Colonie Planning Board meets twice a month and “reviews, drafts recommendations and/or approves or disapproves proposals for site plan review, planning special permits, subdivision of land or conservation development, open development areas and sites proposed for planned development districts,” according to the website.