A three-three Colonie Town Board 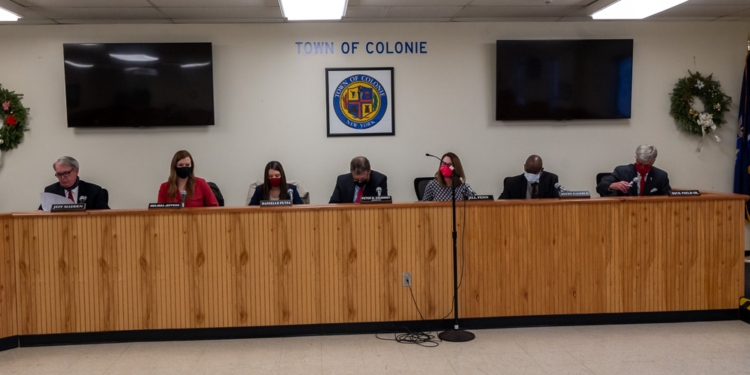 COLONIE — The pomp and circumstance is over, all the oaths are sworn with right hands raised as exclamation points and now a politically divided Town Board has to govern a town spanning nearly 58 square miles with a diverse population of nearly 85,000.

No easy task during good times and these are at best uncertain. COVID-19 is spiking again and the depths of the economic fallout — inflation — from the two-year pandemic is, in the eyes of some financial experts, yet to be realized. And the Town Board is split three-three.

When asked about the divide today, and the implications going forward, the three newly electeds said the expected things, but there is a sincerity, a substance, behind the words based on decades of trust and not just hallow promises.

“I announced one day before he did and I was at his family’s place practicing my golf game and he came up and hugged me and said ‘are you mad at me?’ I said why would I be mad at you because I’m slicing the ball? That ain’t your fault,” said Town Board member Alvin Gamble. “And he said ‘you don’t know do you?’ I said I don’t know what. He said ‘I’m running against you.’ And right then and there we shook hands and we said we would never let politics get in between our friendship of 40 something years. We’ve known each other our whole lives.”

Gamble, a Democrat and the first Black elected in town, was talking about Town Board member Jeff Madden, a Republican. The two grew up together in Colonie, were both heavily involved in athletics and other community organizations and both went to SUNY Brockport. They went their own ways as they found their respective places in life, but remained friends throughout and now have come full circle.

“I’m such good friends with Alvin, who is on the other side, that I don’t see politics being a factor,” Madden said. “He and I have been friends for years and years and I think we will work well together. Everyone up there wants what is good for the town. This is not national politics, this is local politics, and we all want what is best for our kids and our grandkids. I think we will hash out any differences we have.”

Like Madden, Gamble, a deacon and a trustee at his church, expects there will be some disagreements among the diverse group of representatives but hopes they will be resolved “with decency and order.”

“Not everyone is going to agree on everything, but my hope is we will do things with decency and order. We may not always agree, but let’s disagree in a friendly manner and respect each other’s point of view,” Gamble said. “That means we all have a job to do, so let’s do the job.”

On paper, the Town Board is split but Supervisor Peter Crummey is also a Republican and will cast the tie-breaking vote so the GOP technically has a narrow 4-3 advantage for the first time in 14 years.

The last time the Town Board was split 3-3 was in 2008, a year after the now retired Paula Mahan beat Mary Brizzell for the supervisor spot. Two years later, the Democrats took control and kept it until this year. For two years, the Republicans were largely muzzled because the financial crisis slowly came to light and since the party controlled the town for decades the blame fell squarely on their shoulders.

Crummey won a much more decisive victory — 10 percentage points over Democrat Kelly Mateja — than the close Town Board races and while he does need board support on budgetary items and took a pragmatic approach to what lays ahead and left no doubt he is the only full time member of the board and the voter’s did elect him to run the day to day, nuts and bolts, operations of Town Hall.

“The town has certain obligations. The town takes care of the infrastructure — water, sewer and roads and maintaining the parks we already own and maintaining public safety and that includes the fire departments and Emergency Medical Services — I believe everyone will join me in that,” he said. “I believe, I would hope, we can collectively agree on how to do that. I understand reasonable minds can differ, but ultimately town voters have asked me to the manager of town hall and I intend to be that manager.”

Madden and Gamble both say they have known Crummey for years and both say they respect his knowledge of the town and his unblemished history as a Town Court judge.

“It was fun. Everyone has been great and we had great support and I look forward to working with Peter,” Madden said of his first foray into running for office. “He has so much experience in the town so I think it’s going to be good.”

“I’ve known Peter forever and the Gansles and all of them,” Gamble said of his Republican counterparts Crummey and Town Clerk Julie Gansle and her family. “I’m friends with all of them, we’re all friends, and I think because of that I think we will have a tight, close Town Board focused on doing a good job.”

When Melissa Jeffers won her first four-year term to the Town Board in 2017, she was one of the youngest to get elected to the body and the first from the millennial generation. Then, like last year, she received the most votes of any of the six candidates running. But, this year instead of being the neophyte, new kid on the block, she is the senior member of the board. Also, for the first time in her short political career, she is in the minority. Elected two years ago to four-year terms are incumbent Republicans Danielle Futia and Rick Fields and Democrat Jill Penn. Their seats are up in 2023.

“I look forward to working with my colleagues on both sides of the aisle to get the job done for the residents,” she said. “I am a firm believer in putting people before politics and I see an opportunity for everyone to work collaboratively and have a successful term.”

Pete Gannon, who worked on Mahan’s first campaign in 2007 and in Town Hall for years following, said the board’s willingness to work together is “how it should be.”

“You have great professionals with vast experience running the town day-to-day — doing a great job for the constituency,” said Gannon, who is now president and CEO of the United Way of the Greater Capital Region. “In many ways, the board is there to support those professionals, kind of stay out of their way, but listen and make sure they have the resources they need to deliver for the town.

“If you want to launch a fringe political movement go to Twitter. Board members should support those professionals, and the supervisor, and do the best we can to provide a semblance of accountability for their actions.”