Crummey and others take the oath in Colonie (W/photo gallery) 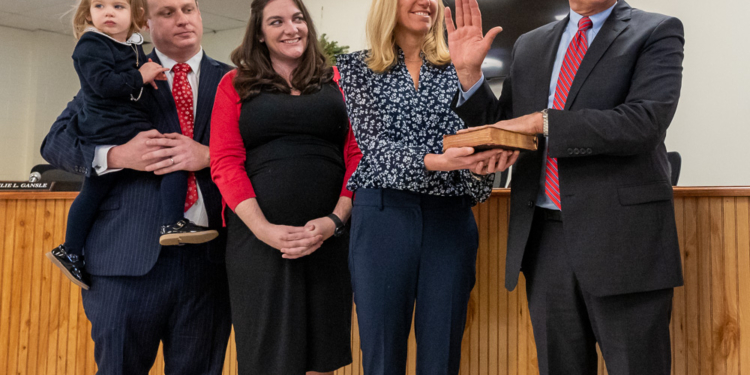 COLONIE — With a nod to his family, supporters and town leaders past, Peter Crummey was sworn in as the town’s 18th supervisor, and first Republican in 14 years, during a ceremony on New Year’s Day.

“What excitement we had in Town Hall today,” the former longtime judge said after the swearing in ceremony for a number of elected in a packed Town Board chambers. “Supporters for all the elected officials were here and I look forward to working with this Town Board and all department heads and all the town employees and I can’t tell you how excited I am to get into Town Hall and start on Monday morning.”

Two new board members, Republican Jeff Madden and Democrat Alvin Gamble, and one incumbent, Democrat Melissa Jeffers, were among those who took the oath on Jan. 1. The six-member board is now split three-three with incumbent Republicans Danielle Futia and Rick Field and Democrat Jill Penn midway through a four-year term. There was the same dynamic — three-three with the supervisor breaking the tie if necessary — in 2008 when the Democrats, led by the now retired Supervisor Paula Mahan, took control of what was for decades a bastion of Republican strength in a decidedly Blue Albany County.

Despite the split, and at what at times was a nasty campaign to succeed Mahan, Crummey said he hopes politics will not interfere with governing.

“The town has certain obligations. The town takes care of the infrastructure — water, sewer and roads and maintaining the parks we already own and maintaining public safety and that includes the fire departments and Emergency Medical Services — I believe everyone will join me in that,” he said. “I understand reasonable minds can differ, but ultimately town voters have asked me to the manager of town hall and I intend to be that manager.”

Crummey was given the oath of office by U.S. District Judge Mae D’Agostino while his partner Sandy Oakley, who he called the “true first lady of Colonie” for her support through the campaign, held the Bible. He was joined by his daughter Carol Crummey McCardle, her husband Jon McCardle and their child Elizabeth, Crummey’s first grandchild.

“For my friends and supporters who gave up so much of their time and resources to support the campaign, I believe I would not be standing here today as Colonie town supervisor without your dedication and resiliency,” he said. “Collectively, hundreds of individuals and labor unions and business leaders came together to make this all possible for our town.”

Crummey had been a Colonie town judge for 21 years before giving up the robes with three years left in his term to run for supervisor. He easily defeated Democrat Kelly Mateja in 2021, 55 to 44 percent, or about 2,400 votes. Prior to becoming a judge, he had a history in Town Hall that included a stint in the town attorney’s office and as the Zoning Board of Appeals counsel.

“I worked in the administrations of Fred Field, Mary Brizzell and Paula Mahan and I am sure I have learned from each of them how to continue service in a stellar manner,” he said. “Most recently Paula Mahan’s gracious and helpful transition will always be appreciated. For me, Paula has served as a colleague, a friend and most recently as a mom wanting to protect me and support me as I move forward.”

Mahan, a popular Democrat, didn’t outright endorse Crummey but she didn’t endorse Mateja either. The former special education teacher announced in early 2021 she would not seek an eighth term and is instead retiring to spend time with family and to do some travelling.

• Alvin Gamble became the first Black elected in the Town of Colonie. He was administered the oath by Town Judge David Green while his son Jordan held the Bible. He was joined by his wife Abbey and his mother Carrie. The Democrat will serve a four-year term.

• Republican Jeff Madden made his first run at public office count by receiving the second most votes of the six candidates running for Town Board. He was administered the oath by Colonie Town Judge Andrew Sommers while his son Jacob held the Bible.

• Incumbent Democrat Melissa Jeffers was sworn in to a second four-year term. She received the highest number of votes, 11,445, of the six candidates running.

• David Green, a Democrat, was administered the oath for town judge by Rensselaer City Court Judge Kathleen Robichard. Green was appointed to the bench in 2021 by the Town Board to fill the vacancy created when Crummey stepped down to run for supervisor.

Green was behind Republican Jennifer Whalen on Election Day but after absentees and mail in ballots were counted he was elected to a full four-year term by more than 700 votes.

• Norman Massry, a Republican, was administered the oath to the seat he has held since 2010 by Sommers.

• Sommers, a Republican, was administered the oath to the seat he has held since 2005 by Massry.

• Michele Zilgme, a Republican, was administered the oath for Receiver of Taxes, a position she has held since 1997, by Massry.

• Julie Gansle, a Republican was administered the oath for a third two-year term as Town Clerk by Crummey.

At a brief inaugural meeting of the newly constituted Town Board following the swearing in ceremony, Guy Roemer was unanimously appointed town attorney. Roemer has been practicing law for more than four decades and in 2011 ran unsuccessfully for state Supreme Court. The town attorney position pays $110,193 as per the 2022 budget.

Also, the board unanimously appointed Matthew McGarry as commissioner of the Department of Public Works. McGarry had been a town engineer overseeing the landfill and solid waste operations. He will replace former DPW Commissioner Jack Cunningham. The position pays $135,547 according to the 2022 budget.

Mary Ellen Ives was unanimously appointed to the confidential administrative aide to the supervisor. The position pays $60,144 according to the 2022 budget.

The board will hold its annual organizational meeting on Thursday, Jan. 13, to formally appoint a number of boards and committee members.

Colonie Town Supervisor Peter Crummey, who was elected last year, is sworn in by U.S. Judge Mae D’Agostino while Sandy Oakley holds the Bible. His daughter, Carol Crummey McCardle, along with her husband, Jon McCardle, and their daughter, Elizabeth, were also present on Saturday, Jan. 1, 2022 at Town Hall. (Jim Franco/Special to the times Union)