Admission - One unwrapped toy for Toys for Tots 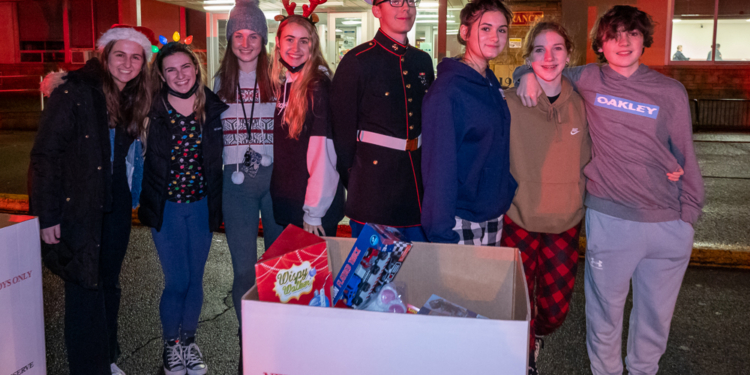 COLONIE — With some help from town first responders, iCARE put on a light show Saturday, Dec. 11, with the admission being — one new toy.

Hackett Avenue, from Sand Creek Road to Central Avenue was lined with fire trucks, police cars, ambulances, school buses and other vehicles better known for non-festive uses, all decorated with Christmas lights, blow up Christmas figurines and other decorations to say Happy Holidays to the Colonie community and collect toys for the U.S. Marines annual Toys for Tots drive.

“We are doing a light show similar to the one at Washington Park, but we are featuring first responders. We have the fire departments, EMS, the police department and some Colonie representatives like our tech department and our transportation department,” said Treva Warzocha, a Colonie High senior and iCARE co-president. “It turned out to be a lot bigger than we ever imagined, so we are pretty excited.”

“I would describe it as festive,” said Colonie High senior and iCARE co-president Madelyn Terry. “We have the U.S. Marines collecting toys here with us, and that is the entrance fee. That is what the work is going to tonight. We are excited to have a fun, festive way to bring up the donations for us today.”

There was a few anxious moments as the two co-presidents and the rest of the iCARE crew woke up to torrential rain Saturday morning. And, when they showed up at the high school at 4 p.m. the parking lot was full of regular, unadorned cars. But, by the time the gates opened at 6 p.m., it was a crisp, cool winter night with not a drop of rain and the decorated vehicles were all in place.

ICARE, a group of faculty and students formed to affect positive change at the high school and the community at large, hosts a number of events throughout the year to raise awareness or other assets — like money … or toys — to help out organizations whose missions often beyond the minds of most high school students.

And when high school students do take a cause to heart, and ask the community to help them help others, Colonie readily responds.

“We are happy to do it. It’s just great. Any time we can help out the community and those less fortunate than us it’s just great,” said Colonie Police Chief Michael Woods, who was with about 10 officers volunteering their time for the event. “iCARE is afantastic group of kids, and when they ask us for help we are always glad to be here.”

While any new unwrapped toy got you in the door, or in this case the driveway, the focus of the light show was to collect toys for middle and high schoolers, who are often overlooked on Christmas morning as attention is on the littler children. At a Stuff the Bus event earlier this month, U.S. Marine SSgt. Ted Kleniewski, who is in his seventh year heading up the Capital District Toys for Tots Campaign, said the campaign has been “going on for 71 years and, yes, we do take this very seriously and we do what we can to support the mission which is giving every kid a Christmas present.”

Since the initial Toys for Tots campaign in 1947, the Marines have collected and distributed some 604 million toys to 272 million children across the country. The Capital District campaign is the third largest in the U.S.

“We are beyond excited with the planning and execution of the students to put this together. They are definitely go getters,” said Colonie High School Principal Tom Kachadurian, who founded iCARE with a small group of students. “They were looking to give back to the community in a new way and this is just another creative way to show their ingenuity and their ability to bring us together and understand the social network Colonie has to offer.”

Warzocha and Terry are both four-year members of iCARE and consider it one of the more valuable activities of their high school careers.

“One of the big things I learned is leadership skills. And, there are a lot of people who you can help in the smallest ways and iCARE teaches you how do to that,” Warzocha said. “To just brighten someone’s day is something to be proud of. Doing things like this, and seeing smiling faces, it makes you feel good about what you are doing.”

Anyone who missed the light show, and wants to donate a toy can find a Toys for Tots box at any school in the South Colonie School District or at a number of businesses around Albany County.

Bethlehem Public Library news: Be a Friend to Bethlehem’s library