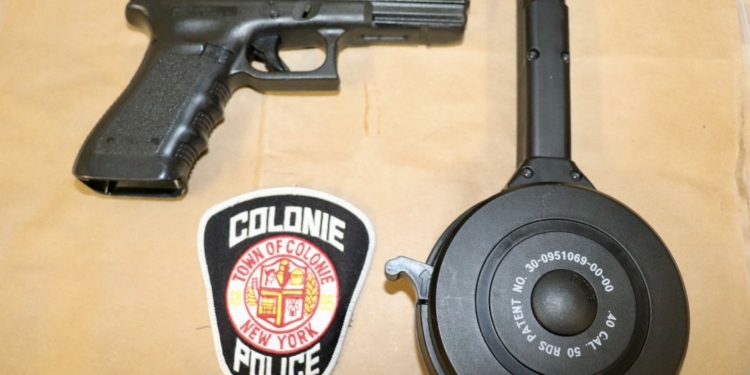 COLONIE — Three handguns were taken off the streets during two separate incidents.

According to Lt. Daniel Belles, on Thursday, Dec. 2, police responded to the Surestay Plus Hotel on Wolf Road at around 4 a.m. for a report of an altercation between multiple individuals.

During the investigation, police discovered Enas Saideddine, 25, of Albany, was allegedly in possession of a “ghost handgun.” A ghost gun does not have a serial number and was likely purchased as separate components and assembled into a working firearm, according to Belles.

Saideddine stands charged with two felonies of criminal possession of a weapon, arraigned in Colonie Town Court and remanded to the Albany County jail pending bail.

A subsequent investigation discovered there were two loaded firearms in the vehicle along with a high-capacity magazine.

Gambrell is charged with three felonies of criminal possession of a weapon as well as the misdemeanor of aggravated unlicensed operation of a vehicle and vehicle and traffic infractions.

Janasia Henderson was also charged as a fugitive from justice based on an active warrant out of the Pennsylvania.

All three were arraigned in Colonie Town Court and remanded to the custody of the Albany County jail pending bail.

None of those arrested were licensed to possess a handgun, Belles said, and none of the weapons were reported stolen. Their origins are still being investigated.

The investigations are ongoing and anyone who has any information is urged to call Colonie police at 518-783-2754.