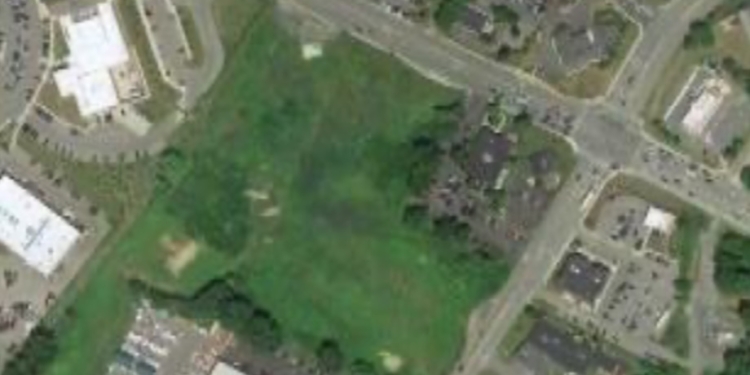 The area of land being developed with the State Police barracks in the upper left, the intersection of Wade and Troy Schenectady roads at the upper right. Photo via Google Earth

COLONIE — A plan by Imperial Pools to construct a warehouse/distribution center was presented to the Planning Board at its last meeting.

The one-story, 60,000-square-foot building is proposed for 5.6 acres of land on the west side of Wade Road adjacent to the existing Imperial Pools facility. The vacant chunk of land is zoned Commercial Office Residential.

If approved, the building would back up to a proposed dealership by Latham Ford on Troy Schenectady Road. With conditions, the Planning Board moved that project through the second phase of the process later at the Tuesday, Nov. 9 meeting.

The owner of Imperial Pools, John and Cathi Ann Maiucorro, also owns that six-acre chunk of land as well.

The proposed warehouse building is double the 30,000-square-foot print allowed in the town COR zoning areas, which requires a variance.

“That’s a big increase and that is my main concern at this point,” said Planning Board member Susan Milstein.

Planning Board member Steve Heider said he is in favor of granting the one waiver requested, to exceed the 20-foot setback required by town zoning regulations, so the building would be a less dominant sight in the neighborhood.

Warehouses generally do not generate much day-to-day vehicular traffic but they do have larger trucks coming in and out. Nick Costa, of Advanced Engineering and Survey, who presented the project to the board on behalf of Imperial Pools, said he would get an estimate on the amount of truck traffic for the board at the next meeting.

The project was in front of the board as a sketch plan review, the first step in the planning process. It will need to come back at least twice more before construction can begin.

LETTER to the EDITOR: Environmental issues in the Town of Colonie