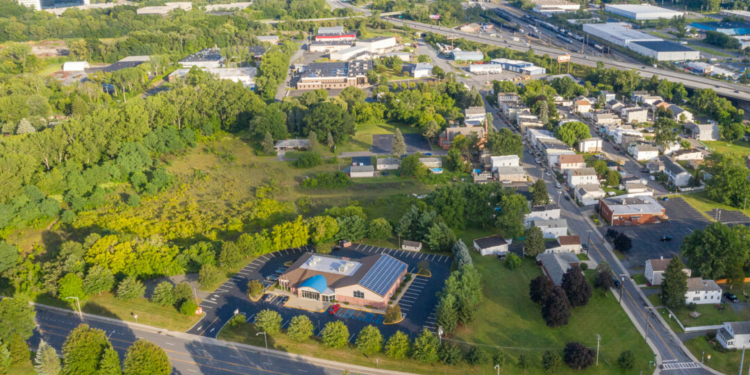 The Joseph Zaloga American Legion Post on Everett Road and the site of the new senior housing project to the left. The neighborhood to the right is prone to flooding. Jim Franco/Spotlight News

The developer, Crisafulli Associates, will pay the town $357,500 in return for allowing a Planned Development District in the Neighborhood Commercial Office Residential zone. The PDD allows for more density than is allowed under the current NCOR zoning guidelines. The Town Board approved the PDD application in September, 2020

Money generated from changing the zoning to a PDD will be used to study and possibly mitigate flooding issues in the neighborhood, make infrastructure improvements in the West Albany neighborhood and fund projects supported by the town’s Local Development Corporation.

Three lots will be combined — 11 and 12 Duffy Street and 28 Everett Road Exchange — to form one 10-acre lot. There is an existing residential home which will be demolished.

There will be 49 garage spots and 136 open air parking spaces, which is less than what the town requires but enough to accommodate a senior housing project where the tenants generally have fewer cars than the projected two per unit.

It will share a driveway with the Joseph Zaloga American Legion Post on Everett Road and there will also be access onto Duffy Lane to Exchange Street. The intersection of Exchange Street and Everett Road has a traffic signal so anyone making a left onto Everett from the site will have an easier time navigating traffic on what can be a busy Everett Road. Residents living along Duffy were initially not enamored with the idea of having their neighborhood used as an access point but it was the lesser of two evils

Dan Hershberg, the engineer from Hershberg and Hershberg who shepherded the project through the planning process on behalf of Crisafulli, said a 180,000-square-foot medical arts building is allowed under the current zoning and building one was explored but it would have generated a much larger volume of traffic, produced a higher level of congestion and there is more of a need for affordable senior housing than space for medical arts.

“There is a need for affordable senior housing in that section of town,” he said previously. The whole point has been to make it as affordable as possible without getting any grants or favor from any boards of IDAs.”

The project was scaled back from a four-story, 153-unit building with 197,600 square feet to the current three stories with 156,750 square feet. There were other changes to the landscape configuration and storm water management.

Since it was first introduced in February, 2020, a number of neighbors living in the West Albany neighborhood voiced concerns about the size and scope of the project and if it would worsen the  long standing flooding issues.

By law, the project cannot make the flooding worse and the hope is the study will find some resolution. The neighborhood is right on the City of Albany line and consists of only a handful of streets including Exchange, Sumpter and Corning street and Cobee Lane. It is surrounded by an industrial park to the east, I-90 to the south with large industrial buildings beyond that, Everett Road to the west and what is largely greenspace to the north where the new building will be constructed.

Joe Grasso, the Town Designated Engineer for the senior housing project, said the development will not have any impact, positive or negative.

At issue, he said previously, is storm water from an 1,800-acre area — not all in the Town of Colonie — that channels water to a 4-foot by 5-foot, box-type culvert that runs under I-90 and the railroad tracks, into the Patroon Creek and eventually into the Hudson River.

On the surface, it would appear making the culvert larger would ease the flooding but the fact it goes under a highway and the railroad tracks makes it not an easy project and it would just funnel more water into the Patroon Creek causing issues there. The convoluted system of storm water management also includes the Six-Mile Water Works Reservoir on Fuller Road which is located in the City of Albany, and a retention pond on Russell Road and the Sand Creek.

The bottom line is, a culvert running under I-90 backs up on the Colonie side of things backs up when there are heavy rains and the neighborhood floods. There was a study done some eight years ago that focused on just the culvert, but Grasso said a regional approach is necessary and should include a large catch basin on Russell Road that collects storm water from the area.