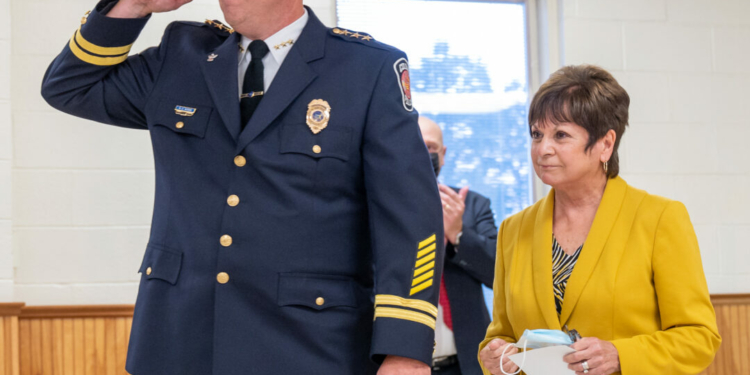 COLONIE — Michael Woods, the town’s new chief of police, said the past 18 months was a difficult time for police officers but thanked the department’s command staff and rank and file for getting through it and is looking forward to what comes next.

“The last year and a half has been challenging for law enforcement, with bail reform, the pandemic, civil unrest, police reform, we were changing every day but at the end of the day, we got the job done,” he said shortly after being sworn in as the town’s seventh chief of police on Thursday, Aug. 26. “Our community was safe and our officers were safe.”

The Town Board unanimously approved the recommendation by Supervisor Paula Mahan to appoint Woods ,a 30-year veteran and lifelong town resident, as chief of the 115-officer department. He will replace Jonathan Teale, who was chief since 2015 and ended a 32-year career with the announcement of his retirement last month.

“I’m very honored and humbled by it. I was the junior guy in the Police Department for five years after I was hired in 1991 so it’s kind of surreal,” he said after the Thursday, Aug. 26 meeting. “But I’m very excited. I have great people to work with and we have great support from the town residents and the Town Board.”

He said there are some policy changes in the works but tops on his priority list is to get enough solid recruits to take the police officer’s civil service exam later this month. The department currently has essentially 111 uniformed officers with at least four retiring before the end of January, 2022. The town has in its budget money for 115 officers so it will be looking to hire at least eight new officers in 2022.

Following in Teale’s footsteps, he is also a big proponent of officer training and providing his troops the appropriate tools and resources to do the job. And, he said, he is not going to change things for the sake changing them.

“There are some things we are looking at to make us better and better trained but I’m a firm believer in if it’s not broken, don’t fix it,” he said following the meeting. “We have good people up and down the ranks. We have well trained people. And when you have that, the day-to-day stuff takes care of itself. I’m not going to change anything just to change it, but if we have to change something, operationally, we will.”

He said calls to “defund the police” would backfire because the first thing that gets cut when budgets are trimmed or eliminated is training and less training means officers on the street are less equipped to handle their jobs in a professional manner.

“We ask more of you today than any time in our history and you continue to show great courage and dedication to duty,” he said to a room full of police officers. “We will continue to interact will all citizens with dignity, honor, empathy and respect. A high level of service and commitment to professionalism has, and will be, our top priority. As chief I pledge to do my best to keep that reputation intact and provide you with the tools and training necessary for you to do your jobs.”

Woods has held several positions during his years of service from patrolman to working in the Investigations and Administration divisions. He was on the Special Services Team for several years, leaving as the team leader.

Woods is a graduate of Shaker High School and UAlbany. He has received numerous awards for exemplary service including 12 Command Recognitions, two Life Saving Awards, the Special Service Award and the Distinguished Service Award.

“Mike Woods has an outstanding record of service and well respected by all members of the Police Department, all the employees of our town workforce and law enforcement agencies throughout the state and the members of our community,” said Mahan, who also appointed Teale. “He is a tremendous asset to the Colonie Police Department and is more than ready to become chief.”

Three other members of the department administration took the chief’s Civil Service exam — Deputy Chiefs Robert Winn and James Gerace and Lt. Todd Weiss. Woods became deputy to fill the spot vacated when Teale became chief and Winn and Gerace were promoted from lieutenant to deputy in December, 2020. Weiss became a lieutenant in 2015.

“To the residents of Colonie who raised their families here, those who shop and work here, the business owners who have trusted us to protect their investment and the many who visit out town for recreation, you can trust the Colonie Police Department will maintain an high standard of professionalism, dedication to duty and a commitment to a high quality standard of living,” he said. “At the end of the day, it has been a tough year and a half but we are still here and we are still here because the vast majority of people nationwide want the police, they respect the police and realize we are here to protect them.”

Other promotions approved by the Town Board were:

• Richard A. Villa: to lieutenant from administrative services sergeant

• James Splonskowski: to investigator from patrolman