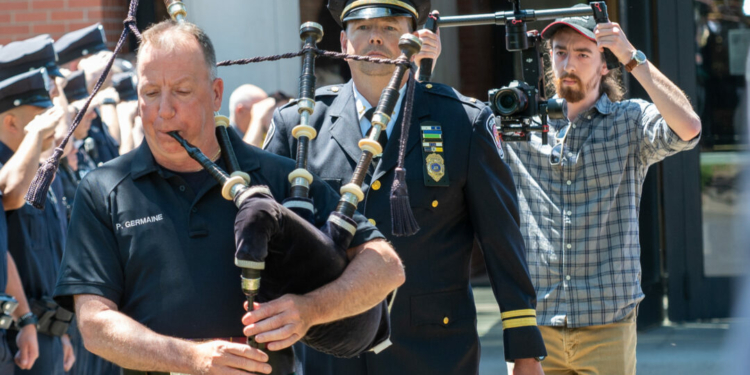 COLONIE — The Police Department, concerned about getting enough potential officers to take the civil service test in September, has hired a video crew to put together a promotional video touting the positive aspects of joining the ranks.

The department currently has essentially 111 uniformed officers — Chief Jonathan Teale’s retirement will become official at the end of August — with at least four retiring before the end of January, 2022. The town has in its budget money for 115 officers so it will be looking to hire eight new officers next year. The town plans to hire the officers off the results of the first test but the academy — provided the new hires are not lateral transfers from other departments — does not start until late January or early February and those officers will not be ready to hit the streets on their own until late in 2022.

The last civil service test for a Colonie police officer was given 2018 and 2017 people took the test. That list has been exhausted with just a fraction of those who took and passed the test now working at the Colonie Police Department. The next test will be given this fall and officials are worried about getting enough good recruits to fill the ranks for what once was a desirable position with decent pay, solid benefits and a better retirement package.

Police across the country came under fire after the murder of George Floyd at the hands of Minneapolis police in May 2020. Police working thousands of miles away were vilified and calls to “defund the police” were heard in cities across the nation. The pandemic, of course, also took its toll as police officers cannot work at home and had to interact with the public, often in close quarters, throughout COVID-19.

Winn said the Troy Police Department did a similar promotional video and it upped the number of prospective officers taking its civil service exam.

The second reason, he said, is that it may make the department more diverse. One issue identified in the Colonie Comprehensive Police Practices Review Committee report released earlier this year is a lack of diversity among the department ranks. In the wake of Floyd’s death, Gov. Andrew Cuomo mandated all municipalities with a police department form a committee, conduct a review, issue a report and implement reforms.

“As the town’s population continues to become more diverse, the committee recommends that the town initiate and implement new recruiting programs intended to diversify the police candidate pool,” according to the report.

“During that training we learned that diversity is much more than just race and would include socio-economic, geographic, education, work experience, life experience, etc.  When viewed through that lens, I believe our department enjoys a very diverse work force,” he said. “We have officers with varying college degrees up to and including advanced degrees. Officers that have previously worked in a large variety of different jobs. Officers that grew up from top to bottom of the broad socio-economic spectrum.”

An ancillary benefit from producing the video is it has increased morale in the department. Not that it was as low in Colonie as in some municipalities, Winn said, but anything that increases it among the troops is welcome.

“Morale certainly has taken a hit based off the national negative sentiment toward police and the pandemic, but we have overall weathered the storm very well,” he said. “This project has been a real positive boost to morale as officers become involved, the units are highlighted and generally they have an opportunity to show off what a good job we do.”

Elevation 10K was the low bidder to produce and distribute the promotional video, Winn said. The company was the low bidder at $3,990. There is not any tax money being spent. Rather, it will be paid with assess forfeiture funds or  Community Services Donated Funds account. The first is money confiscated or paid by drug dealers or other criminals and distributed by the Department of Justice. The latter is an account of unsolicited donations sent to the department.

“I believe we have the best department in the country and recruitment in today’s world is a little different,” said Supervisor Paula Mahan. “We are open to people who want to go on to a law enforcement career and if we can attract more people to that profession the recruitment video is a nice way to go. It is another tool we are trying.”

The starting salary of a police officer is $58,281, which jumps to $86,772 after five years. All candidates who want to take the test must have competed 60 college credit hours from regionally accredited or state registered college university. Candidates must be 19 years old to take the test must be at least 20 to be appointed. Candidates who reach their 35th birthday on or before the date of the test are not eligible with exceptions related to service in the military.

All applicants must be a resident of New York state and live in either Albany, Rensselaer, Columbia, Greene, Schoharie, Schenectady or Saratoga county for at least four months prior to the date of examination. The town can give preference in appointment to town Residents.

Those applicants that pass the civil service exam with a 70 percent grade or higher will be eligibile. Applicants are required to pass a fitness test, complete an interview and psychological evaluation.

Mask mandate back for Albany County buildings regardless of vaccination status