Elks ink deal to sell its lodge to CSSC 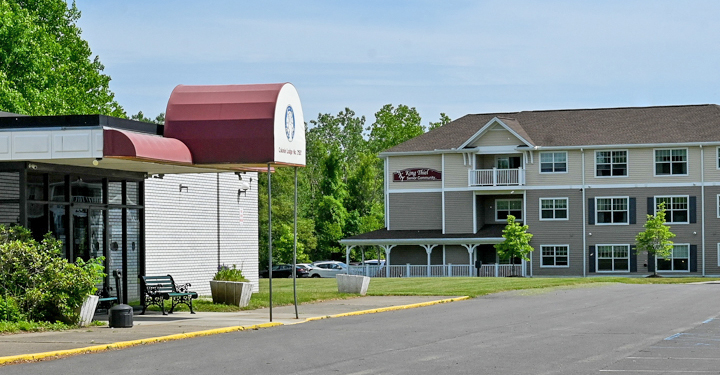 COLONIE — Engineers presenting a plan to demolish the Elks Club off Watervliet Shaker Road and build a three-story, 125,600-square-foot, 99-unit apartment building for seniors explained to the Planning Board why the building cannot be moved farther away from neighbors along Abedar Lane at the last meeting.

The public right of way for Elks Lane, steep slopes, an existing water main and an existing pavilion all dictate where the building, proposed by Colonie Senior Service Centers, has to be built.

“We pushed it as far east as we could without encroaching on the right of way or the side slopes,” said Bill Manfrici, of the firm Hershberg and Hershberg, after showing three other site plans to the board and explaining why each would not work. “That is how we came to the building footprint and location on the site.”

The Elks Lodge sits on a hill off Watervliet Shaker Road. Paperwork to sell the land to Colonie Senior Service Centers has been signed, according to a bulletin sent to the membership by Exalted Ruler Mark Loucks, and the organization has 11 months to “vacate the premises.”

The Elks have three options, he wrote, buy or rent another property, merge with another lodge or surrender its charter.

“If the lodge does not have an acceptable plan to move forward, and we do not have a commitment from many of our Elks members, we will proceed to pursue the merger with another lodge in our district,” he wrote. “This proposal will then be voted on at the Aug. 17 meeting.”

The plan by CSSC to offer 99 more “affordable” units to seniors at the site was first presented in June, but the Planning Board opted for a second sketch plan review to address some rudimentary concerns. It would be adjacent to the existing King Theil Senior Community building, a 96-unit senior apartment building CSSC opened in 2017. The two facilities will share programming and services like meals and transportation.

“The size of the facility has been determined based upon the need in the community for senior apartments that are affordable and to have sufficient density to control costs,” according to the narrative submitted to the Planning Board. “The new facility will seek public financing and other state and federal benefits in order to offer the apartments for rent at affordable prices. The KTSC is fully occupied and there is currently a waiting list of 186 seniors seeking to move into the facility, approximately a three-year wait.”

Joe Grasso, the Town Designated Engineer for the project, said the 99 units dictates the size of the building. It could be four stories, which will impact the neighborhood viewshed more, or it could be two stories, but the footprint would get larger and there isn’t enough buildable land for that.

“We are supportive of the building and its design and layout and how it will minimize the impacts of the Abedar neighborhood area,” Grasso said. “Understanding that they are trying to hit the 99-unit target.”

While the land is already zoned a Planned Development District to allow for more density, it will require modification, pending approval by the Town Board, to allow more building within the existing zone. PDDs generally carry a public benefit component, and for phase one, the King Theil site, it was valued at $186,000, Grasso said, and included sidewalks along Winner’s Circle and accessibility improvements at Town Hall. It equated to $1,866 per unit. King Theil was approved for 100 units and since only 96 were built there is a monetary credit, Grasso said. As such, he is recommending a public benefit for Phase II, should it get approved, of $175,000.

A public benefit is to benefit the town as a whole and enhance the project. CSSC is proposing to make improvements to the Pruyn House, which is “owned by the Town of Colonie and used by the residents of the town.”

“Moreover, the Pruyn House is not only enjoyed by Town of Colonie families but has a regional impact given its public programing,” according to the narrative. “The need at the facilities is great and a spread sheet of capital projects is available.”

The public benefit is ultimately a Town Board decision, but Planning Board Chairman Peter Stuto said rather than the Pruyn House, the Planning Board might consider recommending the money be spent benefit the people in the neighborhood rather than other parts of the town.

It was a second sketch plan review on Tuesday, July 13, so the public was not allowed to speak However, all interested can speak at the next phase of the process, which is concept acceptance. It is not clear when the project will be back before the board.

Planning Board members did have some comments.

Member Paul Rossano said he would like to see the backs of the garages, which would face Abedar Lane residents, a color that would blend in with the existing vegetative buffering.

“The screening between Abedar and the garages is going to be extremely important,” said board Chairman Peter Stuto.

Member Steven Heider said any attempt to reduce the overall height of the building would “be greatly appreciated.”

Member Craig Shamlian asked if a portion of the building not constricted by the steep slope along Elks Lane could be shifted away from Abedar. Manfrici said the building is already three feet from a right of way, but it is a town right of way.

The town may not want to keep Elks Lane because once the new building is constructed it will, some say, essentially be a driveway for CSSC. But, there are some portions of the land, at 396 Watervliet Shaker Road, where a 79-foot cell tower disguised as a pine tree is being constructed, that is still owned by the Elks so the road is not exclusive to CSSC. At issue is who will be responsible for maintenance and snowplowing.

“If the right of way issue didn’t exist, it looks like it could be moved down another 10 to 15 feet,” Shamlian said. “If it helps get it away from Abedar then it makes sense, if it is possible.”

The board unanimously accepted the sketch plan and the project will need to come back for concept acceptance and ultimately final site plan review before construction can begin.

CSSC has two other facilities: The Beltrone Living Center on Winners Circle off Wolf Road with 250 units and Sheehy Manor on Cardondelet Drive with 50 units. Beltrone is geared towards “middle income” seniors and houses the CSSC administrative office and the town’s Senior Resources Department. Rent prices at King Thiel are called “affordable” while at Sheehy Manor they are set for low income seniors.

All 396 apartments in the CSSC system are rented, said Executive Director Diane Conroy-LaCivita, and there are hundreds on the waiting list and it could take years for a person to get a place.

According to the U.S. Census Bureau, in 2019, the most recent data available, 18 percent of Colonie’s nearly 83,000 people are over the age of 65. Two of the three buildings operated by CSSC offer apartments to those over 55 and while that demographic is not exact, it could represent as much as 25 percent of the town’s population.

The average age of the residents at Sheehy, which houses those 62-plus, is in the low 80s, at Beltrone it is 85 and at King Thiel it is in the late 70s, she said. Beltrone and King Thiel are for those 55 and older. All rents are formulaic and on a swing scale based on income.

Should the new facility get approved it will carry the same price range as that offered at King Thiel, which is no more than 20 percent of a person’s income. It is restricted to those 55 and older and residents cannot make more than about $60,000.

Something is killing off nesting songbirds across the region, and it has experts on alert here in New York

Stewart’s to stand before Bethlehem Zoning Board of Appeals