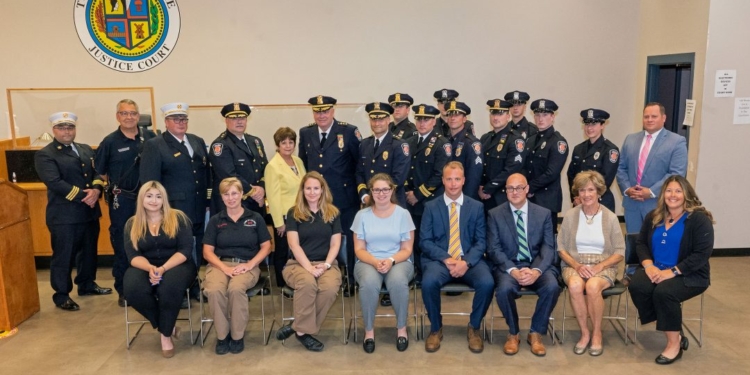 COLONIE — The town, in normal years, announced new hires and promotions at a Town Board meeting with family and friends present to cheer them on and take a picture next to the supervisor or the department head.

It doesn’t have the same effect when the meeting is on ZOOM or YouTube.

Town government, though, continued throughout the pandemic, if not at a slower, smaller pace, and there were new hires and employees were promoted since March of 2020 when the first case of COVID-19 was recorded in Albany County.

Now that things are opening back up, to give those employees the recognition they deserve and family and friends a chance to take a snapshot, the Police Department and EMS Department held a ceremony on Tuesday, June 29, for all those hired or had moved up the ladder.

“Because of COVID-19 we didn’t get to do our group photo, which we like to do, and the family didn’t get to get their photos so that’s why we are here today,” said Supervisor Paula Mahan. “We had a lot of promotions, and we are proud of all of our officers and look forward to finishing out this year and moving into next year with a little more normalcy and we will be back in Town Hall taking our photos, possibly, but the ceremony today worked out well. It was nice for the families and nice for the officers and EMS personnel.”

The town hired four new police officers bringing the total to 112, three shy of a full squad. All four were hired on April 4, 2021, and they are Katelyn Rinaldi, Christopher Pelletier, Jeffrey Rappold and Shane Robichaud.

There were four promotions in the PD hierarchy: Robert Winn and James J. Gerace went from lieutenant to deputy chiefs and Daniel Belles and Thomas Breslin went from sergeants to lieutenants.

Three were promoted to sergeants: Anthony Sidoti, John Rockwell and Richard Villa, who is not an administrative sergeant.

Investigator James D. Gerace was honored for 50 years of service.

On the EMS side of public safety, four were hired: Kayla Griessler, Lauren Nelson, Kaitlyn Michaud and Cristal Marrero.

Police Chief Jonathan Teale, who is retiring in the coming weeks, and EMS Chief Chris Kostyun, recognized the promotions within their respective departments.

Photos below are submitted by the Colonie Police Department. Click here or a photo below to view a slideshow of the rest.

EDITORIAL: Teale was a solid chief for Colonie